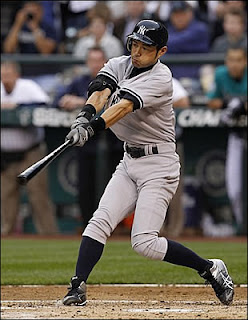 Ichiro is a tough case based on his strong career split against left-handed pitching.  When you're as great a hitter as he was, the hand the pitcher's throwing with probably doesn't matter, and Ichiro's career tripleslash and wOBA against southpaws are actually better than against righties.  But Ichiro's heyday is long gone and the last 3 years are proof.  His batting average against lefties is perfectly fine, but his lack of on base skills is a huge problem.  It would be one thing if Ichiro was hitting for power against lefties, but he's not.  In the last 3 seasons he has just 25 XBH against LHP, just 3 of them HR, so he's not a run producer.  And by not getting on base at a good clip, his speed is significantly lessened as an offensive weapon.  Joe can get away with using him against lefties every now and then, but based on his recent production drop off and his age, I would say Ichiro should be platooned almost all the time.

Gardner doesn't have the largest sample size to work from (just 395 career PA vs. LHP), and his 2012 season was basically a wash, but he does offer plus on-base ability because of his strong pitch recognition, count working, and contact skills.  Gardner is never going to hit for much power, against righties or lefties, but his career BB rate against southpaws is better than against righties.  Even in a SSS, that indicates that he sees the ball pretty well coming out of lefties' hands and his career .320 wOBA against LHP isn't that far off from his .328 against right-handers.  At the respective stages of their careers, Gardner is faster than Ichiro, which makes him more valuable as a baserunner and outfielder, and gets himself on base at a much better clip against lefties than Ichiro.  He can get a day off here and there and Ichiro can play for him, but I think Gardner should be playing every day as long as he's healthy.

Like Ichiro, Youkilis is a former elite hitter whose recent production against same-side pitchers doesn't come close to matching his career numbers.  You can pretty much pinpoint 2010, when Youkilis started to get banged up and only played 102 games, as the time when his ability to hit right-handed pitching started to go south.  Based on his age and last year's performance, there's not much reason to expect a major turnaround from Youkilis this season.  But if any team's style can help resurrect Youkilis' career, it's the Yankees, and Kevin Long has already started to tinker with Youkilis' swing mechanics to speed his bat up.  There's also the issue of the Yankees not having a good lefty infield bat available as a platoon option.  Joe needs to monitor Youkilis' health and give him some days off even while A-Rod is on the shelf early, but Youkilis needs to be in the lineup every day.

The 2012 asterisk was for another SSS warning, but looking at Pronk's splits going back the previous 2 years you'll see that his sample size against lefties was never that big.  Hafner's career numbers against lefties show a guy who could hold his own on the strength of his walks and longball threat, but those days are long gone now that he's mid-30s and banged up all the time.  Hafner's increasing K rate and wildly inconsistent BB rate over the last 3 seasons tells me he's a hitter who struggles to get comfortable against LHP and is losing some of his hitting skills.  There's no point in trying to get Hafner more work against southpaws now, as that would only serve to minimize his overall output potential.  And production aside, it's definitely for the best to keep him off the field as much as possible to try to keep him as healthy and available to mash righties as much as possible.  Hafner is a no-doubt platoon candidate and should only be used against a LHP if he's the last available bat in a game and has to pinch hit for somebody who just got hurt.

Would it be nice to have 4 solid hitters on the bench who could sub in for these guys when the pitching matchup called for it?  Sure.  Is it absolutely necessary?  I don't think so.  Gardner does just enough to be valuable offensively against LHP, and Youkilis should at least be given the chance to work out his new mechanics to see if it brings some of his righty-hitting ability back.  Ichiro doesn't bring much to the table, nor does Hafner, but the 2013 Yankee lineup shouldn't be a complete revolving door of platoon bats.
Posted by Unknown at 7:46 AM