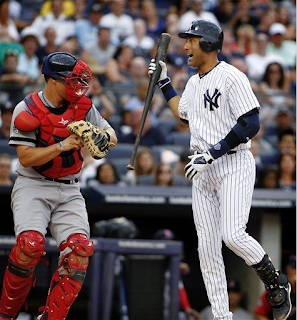 - It was a day of missed opportunities for the offense.  They put at least 1 runner on base in every inning except the 6th, and put the leadoff runner on in 4 innings without scoring in any of them.  Yesterday was a day that showed just how shallow that lineup can be without A-Rod and Teix.

- Phelps: 6.2 IP, 7 H, 3 ER, 0 BB, 7 K, L.  He got the loss, but it's hard to not be impressed by what Phelps did yesterday.  He made 2 bad pitches and paid for them, but outside of those pitches he held the Bahhston lineup in check and looked really good.  He threw his fastball for strikes, got some swings and misses on  his curveball (hi, Cody Ross), didn't walk a batter, and pitched into the 7th inning for the first time his short starting career.

- Robinson Cano: 0-4, 1 K, 4 LOB.  The leader of the Yankees' 0-9 Risp Fail charge yesterday, which is not a good thing when you're hitting third.  Methinks if Teix was healthy enough to be in the lineup, we wouldn't see Cano in it right now.

Can't set up the final game of this series any better from a storytelling perspective.  Rubber match, Sunday night, Yankees rolling out their best starting pitcher who's coming off one of the best starts in his career.  Fraud Sawx counter with what is supposed to be their best pitcher who has gotten absolutely rocked this season and rocked by the Yankees multiple times in his career.  What will happen?  Find out tonight!
Posted by Unknown at 9:28 AM