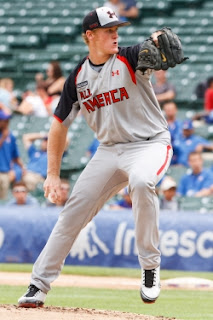 McDaniel described Hensley as a "19-year-old power arm learning to harness his stuff," but praised his raw stuff, commenting on the 2-seam movement in Hensley's mid-90s heater and his "plus" curveball.  McDaniel was also impressed by the potential in Hensley's changeup, a pitch that he hasn't fully developed yet but McDaniel still called "better than many of the top prep arms from his class that I scouted this year."  McDaniel sees Hensley's frame as a good indicator that he "can pitch downhill effectively," and best sums up Hensley with this statement:

"The Yankees will work with him to clean up his delivery, ... but the elements are here for a frontline starter if Hensley can make the necessary adjustments."

From a fan and amateur prospect ranker perspective, there's nothing here that stands out as a complete surprise.  We knew that Hensley had plus stuff when the Yankees drafted it and this report confirms that stuff is for real, even after a long layoff and relatively short work time in the Minors so far.  Mechanical flaws and inconsistent command are to be expected from a prep pitcher Hensley's age, but the tools are all clearly there for him to become a very good pitcher.  Most importantly, this report backs up all the stuff we heard about Hensley right after the Yankees drafted him and gives no indication that there are any issues with his shoulder.

Hensley's stats so far in his still-very-short GCL career support the details of McDaniel's report.  In 9.1 IP over 4 starts, Hensley has struck out 11 batters and walked 6, flashing the quality of his stuff and the issues with his command.  There are also signs that Hensley is already starting to improve.  He gave up 3 of the 4 ER he's allowed so far in his first appearance, and has only allowed 1 in the last 7.2 IP since then, getting burned by a lot of bad defense behind him in the process.  He's thrown 2 short scoreless appearances out of his last 3, struck out 5 in one of them, and had his first outing without a walk on Thursday.

As far as first reviews go for Hensley, this is all pretty good.  The first scouting report of him post-debut supports all the big details of the immediate post-draft report, and the early numbers on the field show a kid who is already starting to figure things out and learn.  There's a long way for Hensley to go, but this should help boost his prospect status already.
Posted by Unknown at 4:36 PM