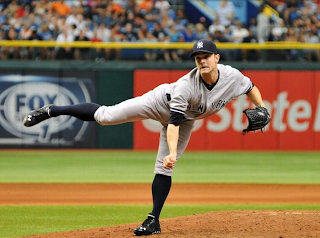 - Nova: 6.2 IP, 6 H, 2 ER, 6 BB, 3 K.  I'll give him credit for working deeper into the game than he probably should have given how bad his command was.  But 6 walks is 6 walks and today was the third straight game in which we saw that command going in the wrong direction.  If Nova truly has turned over a new leaf as a fastball/curveball pitcher, he needs to make the necessary tweaks to regain that command and cut down on the free passes.

- Bottom Third of the Order: Combined 0-11, 7 K, 4 LOB.  Lyle Overbay's spot in the batting order was where scoring chances went to die today.  Mark Reynolds was his usual all-or-nothing self.  Chris Stewart was who we thought he was.  Ugly all around.

It's off to Toronto for another series with the Jays, this time on their home turf (literally) before heading home later in the week.  Phil Hughes and R.A. Dickey kick things off tomorrow night.
Posted by Unknown at 7:20 PM