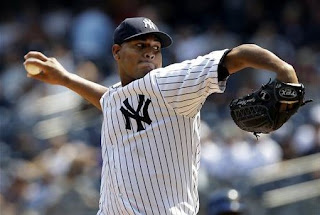 That Nova managed to pitch around his command problems and still get victories in these last 2 starts is a big deal.  The Nova of old would have crumbled in those situations, either by overthrowing and walking guys or by grooving fastballs.  The new Nova, working with fewer pitches than the Nova of old, stuck to his plan, made pitches when he had to, and stayed in the game to give his team a chance to win.  While there's no way to measure it, there certainly appears to be some mental and emotional changes in Nova's approach to go along with the changes in mechanics and pitch selection.  This new and improved Nova could be a huge factor in solidifying the 2014 rotation.

Presently, the 2014 Yankee rotation is slated to be CC Sabathia, Nova, David Phelps, Michael Pineda, and question mark.  They are almost certainly going to make another offer to Hiroki Kuroda after this season, and the front office has stated that they'll make a qualifying offer to Phil Hughes, but it would be a stretch to say that it's very likely they will come back.  The #2 type starter that Nova's been pitching like the past few months could end up being his job next year.  If CC doesn't figure things out, Nova could end up filling that de facto righty ace role that Kuroda has assumed this year.  That's a pretty big step up from where he was this time a year ago and even where he was in April when Joe was quick hooking him out of his first few starts.  Chances are the Yankees will make a push for a veteran #2 guy, and it could end up being Kuroda.  If Hirok returns, the top of the rotation becomes much more stable and Nova would slide into that #3 spot and try to be the solid third starter that Phil Hughes never became.

Regardless of what spot he takes, Nova has once again presented himself as the young homegrown pitcher who can take the next step and fill a need.  He's pitched at least 6 innings in every start since July, he's throwing more strikes, getting more GB outs, and cutting down on walks.  Everything about the way he's pitching suggests a pitcher who's starting to mature and figure it out and that would be a huge boost to the Yankee rotation next season.  Nova will be 27 when next season starts, in his first arbitration year.  He stands to get a substantial raise in his first year of eligibility if he continues to pitch well down the stretch.  If he carries this performance over into 2014 and does it in a bigger role, he could force the Yankees to consider offering him a new deal before his arb time is up.
Posted by Unknown at 2:00 PM