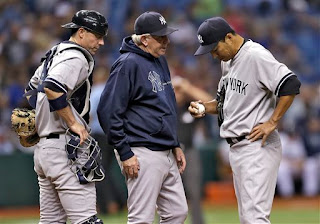 - Eduardo Nunez: 2-3.  Had 2 of the other 3 Yankee hits and managed to not hurt his hamstring worse and bring the short bench into play.

- Kuroda: 6 IP, 9 H, 7 ER, 1 BB, 3 K.  Easily Hirok's worst start of the season.  He didn't have anything and he wasn't fooling any of the Rays hitters.  He's allowed a start like this every now and then with how good he's been since first joining the Yankees.  It just makes it that much tougher for the Yanks to stay in contention when he has a poor outing.

Big lefty matchup in the second game of the series tonight.  CC Sabathia and David Price.  That's a lotta lefty.
Posted by Unknown at 6:48 AM

Archer is the new Felix Hernandez against the Yanks. They can't seem to hit him.