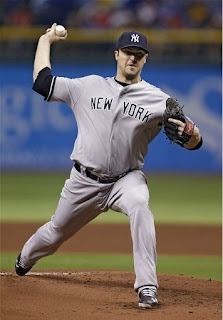 Pretty much, yeah.  Phil worked both sides of the plate with his fastball to right-handed hitters, and even though not all of them were for strikes he still changed locations enough to effectively set up his offspeed stuff.  His slider was really good last night, and his even distribution of fastball locations across the strike zone made it even more effective.

Against lefties we also see a much more even distribution of fastballs, a marked improvement from his start last Thursday.  He worked the inner half a lot with the 4-seamer, threw it for strikes, and that allowed him to be more aggressive with his offspeed stuff away.

The most important thing for Phil last night was throwing strikes in general.  He threw 71.56% of his 109 pitches for strikes, including 46 of his 62 4-seamers, and threw a first-pitch strike to 24 of the 27 batters he faced.  When he's doing that-attacking with his fastball to set up his slider and curve, and working both sides of the plate to both righties and lefties- he can get it done.