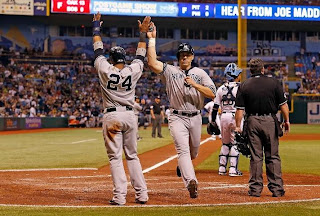 - Hughes: 7 IP, 6 H, 2 ER, 2 BB, 6 K.  Didn't factor in the decision, but pitched really well for the second straight outing and stood toe to toe with one of the best in the business.  Hughes threw strikes all night(78 of 109 pitches), was aggressive with his fastball, and worked effectively out of trouble.  That's what we want to see from Phil.

The Yanks will have a chance to steal a road series tonight and they'll have the advantage on the mound.  Alex Cobb is no joke, but he's a righty and he's not as good as Andy Pettitte.  First pitch is just after 8 PM Eastern/7 PM Central.
Posted by Unknown at 7:23 AM