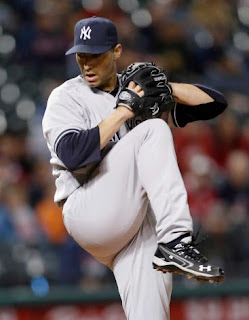 For a rotation that started the season with health concerns at the top in CC and the bottom in Phil, this minor setback with Andy comes as a bummer.  He had been the team's best starter through the first two rotation turns, and the importance of keeping older starters like him and Kuroda healthy this season has been repeatedly stated.  It's for that exact reason that this decision by the Yankees is the right one.  The off-day today allows them to push Andy back a few extra days without having to use a 6th starter and without having to juggle any other pitchers around.  Using those few extra days to make sure this back issue stays a minor one is the smart move to keep Andy feeling good and pitching well in the long run.
Posted by Unknown at 10:14 AM