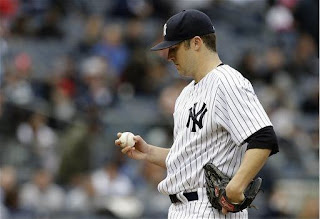 Before we even get to that part, let's just quickly review how bad Hughes was on Saturday and how his continued shortcomings in pitch command and pitch selection are contributing to his ineffectiveness.  Hughes threw 60 pitches in his 3 + innings of work on Saturday, 37 of them for strikes (61.7%) and 34 of them as 4-seam fastballs (56.7%).  Those 60 pitches were divided up among 19 total batters faced, 14 of which Hughes threw a first-pitch strike to (not bad) and 11 of which saw a first-pitch fastball (kinda bad).  As was the case last year, Hughes was pretty predictable with his fastball usage early in count, following up his 11/19 first-pitch 4-seamers with 7/11 4-seamers in 0-1 counts and 3/5 in 1-0 counts.  Add that fastball predictability to his lack of offspeed command, and it's easy to see why he got knocked around as badly as he did and registered just one solitary swinging strike.

Now factor in Hughes' pitch location breakdown to righties and lefties and the picture becomes even clearer and more frustrating:

The approaches are noticeably different - sliders and cutters down and away to righties and curveballs and changeups to lefties - but the results are incredibly similar.  The majority of Hughes' pitches thrown to righties were either middle zone and over.  The same basic location trend exists in the plot to lefties, with an even more dramatic shift to the outer part of the strike zone and beyond with his 4-seamers and changeups.  Not only was Hughes missing his spots and leaving too many fastballs in the strike zone, he was leaving them in the outer portion of the zone where hitters can extend their arms and make good contact.  Furthermore, the overwhelming amount of pitches located on the outer half and beyond to left-handed hitters suggests that was something Hughes was doing deliberately, and that it was something the Oriole hitters were picking up on.

You're going to have a hard enough time on the mound when you're not hitting your spots with your offspeed stuff.  It's something we've seen Hughes struggle with for years, and those plots certainly suggest that the Baltimore hitters were letting garbage offspeed pitches go by and zeroing in on Hughes' fastball.  But if you're going to be as predictable with your fastball location as Hughes was on Saturday, you might as well be throwing batting practice.  To not come inside against hitters, regardless of what side of the plate they're standing on, allows them to get too comfortable and wait on pitches and that's exactly what Baltimore did.  Had Phil been able to pitch inside more effectively with his fastball, he could have at least given himself a fighting chance to make it through a few more innings by giving the Oriole hitters something else to think about.

Having not watched the game live on Saturday, I can't say with 100% certainty whether this approach was something Phil and Francisco Cervelli did by choice or whether there was a lot of shaking off by Phil to get to these pitches.  The more appropriate word could be "refusal" to pitch inside, which would be even worse than "inability."  But in the grand scheme of things, that part of the equation is irrelevant.  What matters is that what Hughes was doing wasn't working and he did nothing to try and change that.  He didn't work his 4-seamer inside to make hitters move their feet and change their approach when they started keying on the fastball away.  He kept throwing the same bad pitches in the same part of the strike zone and he got pounded for it.

Check the L/R location plots for his 4/6 start against the Tigers and you'll see a similar pattern.  This makes Hughes' start to the season even more concerning, even if it is only two starts.  It's one thing to be predictable with your pitch selection, but you're really asking for trouble if you're going to match that with similar predictability in the location of your pitches.  If Phil wants to turn this poor start around, he needs to change things up with his fastball location and be willing to pitch inside.  It will help make all his offspeed pitches more effective in games when he does have command of them, and it could help him survive in games when he doesn't.

(All plots and pitch stats courtesy of Texas Leaguers)
Posted by Unknown at 12:47 PM