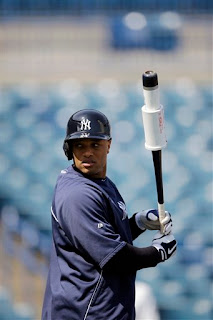 
For the sake of comparison, here are Cano's called strike zone and spray chart plots from the Boston series:

And here are the plots from this weekend's Detroit series:

Obviously we're dealing in small sample sizes here, but the approach from both sets of opposing pitchers was nearly identical, with the Tigers' pitchers doing a better job of consistently pitching Cano away.  Having not watched any of this past weekend's games, I can't comment on how much, if at all, the Tigers shifted their infield, but even if they didn't and even though they threw three right-handed starters out there, they stuck to the same pitching script that Boston did.

To his credit, Robbie has shown himself to be very willing to go to the opposite field and not fall into the trap of trying to turn on those pitches.  We've seen that tendency from him when he's pressing, which usually leads to a lot of groundouts to the right side, and other teams surely have that stashed away in their memory banks when they take this very obvious approach against Cano.  It hasn't resulted in much yet -- Cano has just 3 singles and 2 BB in 25 PA -- and Robbie has bounced into 2 double plays, but the fact that he's making the effort to take the ball the other way is a good sign that he should be able to figure out a way to beat this approach if/when it continues.

And it's not like the situation with Mark Teixeira, where he had flat out lost his ability to his the ball the other way as a lefty.  Cano has always been a good opposite-field hitter; it's part of what makes him the great all-around player he is.  To date, Cano has a career .862 OPS, .369 wOBA, and 126 wRC+ hitting the ball the opposite way, and that's factoring in the early handful of outs this season.  He's at his best, and his most powerful, hitting the ball to right field, as is the case with most good lefty hitters.  To say that he's weak hitting the ball to left, however, would be a mistake and there's every reason to believe that Cano can make the necessary adjustment to combat this new approach.

The infield shifts will be a on a team-by-team and game-by-game basis depending on what type of personnel the opponent has on the field and how capable they are of playing a successful shift defense.  The "pound him away" approach, on the other hand, looks like it's going to be a season-long strategy against Cano, especially early when he has little to no protection hitting behind him in the lineup.  It's something Robbie probably isn't used to or totally comfortable with, but if he can continue to not reach as he's done so far, stay patient, and continue to be willing to go with pitches on the outside corner, he should be able to stay as productive as he's always been.

(All charts and plots courtesy of Texas Leaguers)
Posted by Unknown at 2:00 PM