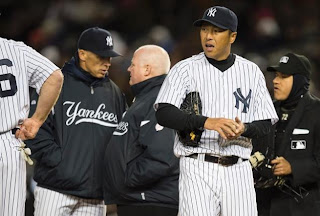 I know Kuroda made it through his Friday bullpen without any major issues, and he's got Adam Warren handcuffed to him again, which is probably why Joe and Cash feel comfortable letting him start.  I'd just feel a lot better about skipping Kuroda for a trip and starting Warren if that gives his finger enough time to fully heal.
Posted by Unknown at 10:47 AM