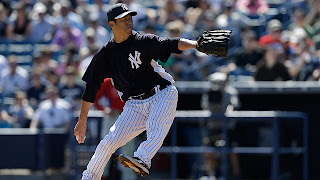 The Yankees wrapped up their Grapefruit League schedule with a game against the Pirates yesterday.  Hiroki Kuroda was on the mound for his final spring start and he did not disappoint.  We also got to see the bench picture start to come into focus as Juan Rivera was released during the game after starting at first base.  There are only two ST games remaining before the regular season kicks off on Monday.  We're getting close, people.

- Not a lot of offense in this game.  The Yanks plated their lone run in the 9th on a double by Lyle Overbay. He isn't going to make up for Teix's power, but if he can hit doubles on the reg the Yanks will take it.

- Kuroda was very sharp yesterday, allowing just 1 hit and 0 runs in his 6 innings of work.  He struck out 5, didn't walk a batter, and looked as good as he has all spring.  Perfect way to end your camp.

- Brennan Boesch and Thomas Neal both doubled, and Francisco Cervelli tripled for the other XBH on the day.

- Other offensive notes: Kevin Youkilis went 1-3 and finally got a hit that wasn't for extra bases.  Slacker.  And Robinson Cano returned to the lineup with a 1-3 day of his own.  Good to see he recovered quickly from his stomach ailment.

- Scary moment for Boone Logan in the 7th, and I'm not talking about the 2 runners he put on base that came around to score.  Logan had to leave the game after getting hit by a line drive, but after the game he told reporters he was fine.  He's scheduled to pitch again today.

The Bombers start their trek north with a stop off in the nation's capital today to play an exhibition game against the Nationals.  Andy Pettitte gets the ball and we should get to see a very close version, if not an exact version, of the Opening Day starting lineup.
Posted by Unknown at 7:29 AM