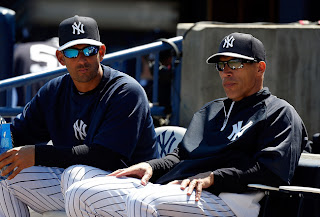 It's all done.  The projections, the previews, the analysis, and the hypothesizing.  The Yankees have made the moves they've made and players have suffered the injuries they've suffered.  After this weekend, that all takes a backseat to the start of the regular season and the return of Yankee baseball to our everyday lives.  The only thing left to do before then is take all that's been discussed and analyzed these past five plus months and use it to make predictions.

This season is easily the most difficult one to predict from a Yankee fan's/blogger's perspective.  The team has taken a big step back on paper, and despite the nearly $220 million payroll their battle will be the most uphill one in years.  Between their collective step back and the collective step forward that the rest of the AL East has taken in the past two seasons, it seems the time is perfect for the Yankees to give up their throne at the top of the division.  Do I believe they will?  Yes, I do.  Do I believe they will completely fall apart and drop down to the bottom of the division?  Find out for yourself.

After the jump, the official AB4AR 2013 MLB predictions.

There you have it.  When the dust settles, I think the Yankees will find themselves in the postseason again.  They'll no longer be one of the favorites, and I don't think they will factor into the World Series discussion this year, but with all the problems they're entering the season with, and all the potholes they're sure to encounter along the 162-game way, I think coming away with a playoff berth will be a great accomplishment and I still believe it's achievable.  Because they're no longer the head of the class, the anti-Yankee voting sentiment at award time will go away and the Yanks will walk away with some hardware.  Robinson Cano will get his MVP; Joe will get MOY for recognition for the great job he'll have to do to navigate this team back to the playoffs.