It's Still Important To Stay Grounded With Ichiro & Gardner 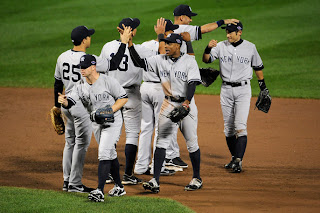 ESPN NY's Spring Training countdown series got off to a pretty crummy start, but he's been a little better lately.  Earlier this morning, Wally Matthews took a break from handing out fictional punishments on Alex Rodriguez to discuss the 2013 outfield, which is actually a worthwhile topic.  The Yankees are looking at a serious offensive downgrade from that group this year, and the ability of Brett Gardner and Ichiro Suzuki to be productive in their ways could be a big determining factor in the level of success this season's team can have.  Wally, to his credit, thinks Ichiro and Gardner can get the job done, and maybe they can.  But Wally's reasoning for why leaves much to be desired.


Matthews gave reasons to be optimistic about the slap-hitting duo, citing their strengths.  But in doing so, he made the mistake of looking at Ichiro from a high level, where the overall numbers are still very good.  Matthews references Ichiro's career .365 OBP, a value higher than that of the departed Nick Swisher, and his 38 SB per year career average as reasons for why Ichiro can be productive.  Ichiro is 39 years old and has been on the decline for a while.  Even with his strong .342 wOBA stretch in pinstripes, Ichiro still finished 2012 with just a .307 OBP and hasn't had a truly elite OBP season since 2009.  It's also worth mentioning that he hasn't scored over 90 runs since '08.  The truth still is that Ichiro hasn't been an elite offensive player for a while now, and has hardly been average the last few seasons.  His career numbers can't be looked at as a basis for expectations.

Gardner's strengths are also based on his strong on-base and base stealing skills, but as a player still in his prime at age 29 his career numbers can be given more weight.  He may not be as good as he was in 2010, but even at a season below that he still had a solid .345 OBP in 2011.  Gardner's age or production trends aren't the concern with him, but health is.  He's always been the type to get incredibly banged up over the course of a full season, making him a weaker offensive players when the games count most, and he only played in 16 games in 2012.  And as better as I feel about Gardner's possible production ceiling compared to Ichiro's, Brett doesn't have a 100-runs scored season under his belt either.

Too many Yankee fans made and continue to make the mistake of reading too much into Ichiro's strong team debut after last year's trade, and looking at him that way can create unrealistic expectations.  Looking at his career totals instead of his recent history can also create unrealistic expectations, as can ignoring Brett Gardner's injury history.  It was true what Matthews said about Gardner and Ichiro being very good defensively, and there will be value in that.  But to expect both of them to provide consistent above-average offense or better because they're fast is a stretch, and to expect them to make up for the loss of Swish probably is as well.
Posted by Unknown at 2:00 PM

all I hear about Ichiro is that he was rejuvenated by being on the Yankees but I think 1st it had more to do with Jeter following him in the order making pitchers unable to pitch around him. 2nd with the Yankees line up pitchers can not through all fastballs to the person following him in the lineup taking away his speed so he can steel more. I believe that Ichiro should bat 1st or 9th so he can be followed by gardner, with gardner following him Ichiro will have the chance to see pitches and pick his spots while gardner will see more fastballs to slap around.

If Ichiro and Gardner are hitting 1-2, where is Jeter hitting?

Jeter will bat third you would lose power to start the game but with ichiro and gardner in front of him there should be plenty of situations of at least one person in scoring position. and with three players with high obp in front the 4 and 5 hitters should have plenty of chances to drive in runs.

its spring so we look at the bright side Ichiro leads off with a single, with gardner taking pitches Ichiro steals second, Gardner walks, double steal jeter base hit Ichiro and gardner score. The chance of Jeter getting a base hit here is much better than the chance of a home run by someone else,and keeps the inning going.