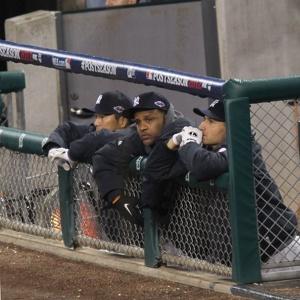 Today's the big day.  As I sit here writing this and as others of you will sit here and read it, players are making their way to the Yankees' Spring Training complex to begin their preseason work.  There's a lot that needs to be done to prepare for the 2013 season, and a lot that still needs to be worked out, but one thing will hold more true than it ever has for the Yankees this year and that's the need for their starting rotation to stay healthy and pitch effectively.  Last year's group did for stretches, especially for a period in June when Andy had joined the rotation and gotten up to full game speed, but injuries and uneven performance were the bigger storylines.  The Yankees head into camp this season with the same 6 familiar faces that finished last year vying for the 5 spots in this year's rotation, with some youth and depth behind them.


CC Sabathia- The unquestioned ace of the staff is coming off offseason elbow surgery, surgery that has put him a little behind his normal throwing schedule.  But Sabathia said last week that he won't be far behind his teammates, and he is expected to be ready for the start of the regular season.  Sabathia also re-focused his energy into getting in better shape for this season, and recent pictures make it look like he's lost upwards of 40 pounds.  Will that have any effect, positive or negative, on his success this year?

Hiroki Kuroda- After briefly flirting with the idea of retirement or returning to Japan, and declining the Yankees' qualifying offer, Kuroda re-upped on another 1-year deal to return to New York and take another run at a ring.  Hirok threw a career high 219.2 regular season innings last year, 235.2 in 35 total starts if you count the playoffs, and he just turned 38 2 days ago.  He's never had problems with durability, but it's something the Yankees will monitor.

Andy Pettitte- Like Kuroda, Andy came back for 1 more year this year, this time with a much less dramatic buildup to his re-signing than last year.  Andy did some flirting of his own this offseason, with the idea of pitching for Team USA in the World Baseball Classic, but decided it better to skip the tourney and report to camp to continue to get himself prepared for the regular season.  Andy is the unofficial anchor of this rotation, and a healthy season with at least 25 starts would be huge.

Phil Hughes- He got his money in his final arbitration year, now Phil Hughes is pitching for a big payday in 2013.  It may come from the Yankees, it may not, but Hughes will have to continue to make strides in rounding out his pitch repertoire and pitch selection.  Doing so successfully should help cut down on HR allowed, which was Hughes' Achilles' heel in 2012.  There hasn't been a lot of talk about Phil's offseason work this offseason, but after his 2011 I think we can assume he's learned his lesson and will show up in shape.

Ivan Nova- Is he the pitcher who earned himself the second starting spot in the 2012 ALDS?  Is he the pitcher who got shelled and gave up a shit ton of XBH in 2013?  Is he somewhere in the middle?  This will be the year to answer all of those question as Nova comes into camp with a much less secure spot in the rotation than he had last year.  He needs to prove he can balance stuff and approach to make himself a consistent pitcher and eyes will be on him from day 1.

David Phelps- The only guy who gets to be on both lists, Phelps gets the (dis)honor of being Nova's competitor in this year's version of the "5th Starter Sweepstakes."  Phelps showed flashes of brilliance in his spot starts last year, but still doesn't have enough of a sample size to make an accurate determination of what his ceiling is.  He's the underdog in the competition with Nova, probably based more on his track record of success working out of the 'pen than Nova's success as a starter, but can and should win the spot if he really outpitches Ivan.

Adam Warren- He's ticketed for his 3rd straight year in Triple-A, this year as the staff's de facto ace, but Warren would love a chance to redeem himself for last year's disastrous spot start against Chicago and prove he has value as a Major League starter.  He's moved to the front of the line for MiL call-ups, and with the recent injury track records of a few of the Yankee starters there's a very good chance we'll see him at some point this year.

Brett Marshall- The young sinker baller continues to climb the ladder, and has reached the highest level of the Minors at the perfect time.  Other high-level starting prospects have faltered or gotten hurt, and the Yankees are looking for cheap contributors for 2014, so Marshall has a great opportunity to make a name for himself with the Major League coaching staff and position himself for a chance to break in like Phelps did last season.

Michael Pineda- The wild card of the 2013 rotation, Pineda continues to work his way back from labrum surgery in his pitching shoulder.  He's been working off a half-mound for about two weeks now, and could graduate to a full mound as soon as next week.  His return is still scheduled for sometime in the summer, and depending on what the situation is in the rotation at that time he could slide right into a spot.  Projections for Pineda this season have been surprisingly optimistic, and the Yankees would love to get something positive from him this year to prepare him for a full-time return to the rotation in 2014.