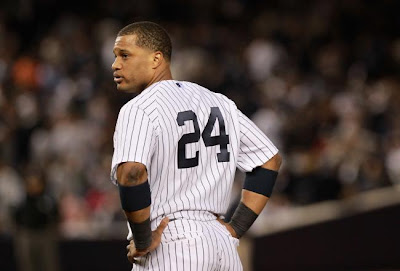 Cano finished the 2012 season with a career .290/.338/.453 line against LHP (.344 wOBA), and that's after the down year he had this season.  Entering 2012, Cano was coming off a season in which he hit .314/.354/.525 against lefties, a result we've become accustomed to seeing from Robbie and the type of L-on-L production that makes him one of the best all-around hitters in the game.  In 2012 something changed, and Robbie struggled mightily against lefties to the tune of .239/.309/.337 (.290 wOBA) in 269 plate appearances.  He still drew a fair amount of walks, for him at least, against southpaws.  But the drop in batting average and power was significant, and something that could potentially raise a red flag given Robbie's pending free agency.

As for the causes to this negative shift in Robbie's "vs. LHP" production, let's go to the charts:

Cano's spray chart against LHP from this season shows a bit more of a pull-heavy BIP distribution than we typically see from Robbie.  One of his greatest calling cards is his ability to go the other way with the ball, often with power, and there just isn't a whole lot of that being shown in this chart.  Most of his hits are to right field or back up the middle, and there are a high number of GB outs.  Those might be a very telling sign as to what was going on here, as another one of Robbie's calling cards is his tendency to roll over and hit a lot of ground balls when he's struggling.  Pitchers usually accomplish this with Cano by pitching him low and away, an area difficult to generate any real power from on a swing, especially a pull swing lefty-on-lefty.  This could very well have been a case of Cano trying to pull the ball too much on pitches low and away instead of either taking them for balls or taking them the other way.

The pitch location distribution shown in Cano's called strike zone and swing plots from 2012 lend support to that theory.  It's pretty clear from these plots that the approach against Robbie in 2012 was to stay away.  A very high proportion of his called strikes were on the outer half and a lot of attempts were made to get the outside corner, and there's a much bigger collection of offspeed pitches on the corner or low and away that Robbie swung at than there are on the inside corner.  Taking pull hacks at pitches in that area should result in a lot of groundball outs, and thinking back to his slumps during this season that was a common occurrence for Robbie.

So what's really going on here?  Is Cano falling victim to K-Long's pull-happy preachings like Teix and C-Grand?  Are we starting to see the erosion of Cano's skills as an elite all-around hitter already?  Based on his superior track record and the fact that this season was the first in many that Cano didn't perform well against lefties, I'm willing to give him a pass and just call it an off year.  It wasn't like Cano was just wildly swinging at everything up there.  His 7.4% BB rate against lefties, while lower than his rate against right-handed pitchers, was still above his career average.  And he actually did hit a lot of balls on the screws against lefties; his 28.4% LD rate against them was better than his LD rate against righties, suggesting that some bad BABIP luck could have been in play.

It seems to me like Cano got caught up in trying to pull the ball too much against LHP and was never able to make the adjustment back to a balanced approach once pitchers started exploiting it, and that he just ran into some rotten luck on well-hit balls, an idea supported by the aforementioned strong LD rate and his measly .272 BABIP off southpaws.  There's a chance that this is the beginning of a regression against lefties for Cano, but 1 year of data is not even close to being definitive proof.  If Cano can get back to being more balanced in his approach against lefties and being content with taking the ball to left when they pitch him away, something he's done for years, I think we'll see his "vs. LHP" splits get back to normal in 2013.

(All charts courtesy of Texas Leaguers)
Posted by Unknown at 7:52 AM