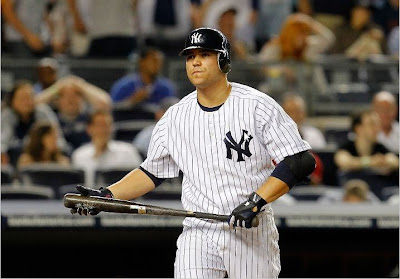 
- Close Games: Every Yankee loss in this current 3-8 stretch has been by 2 runs or fewer.

- Uneven Run Distribution: The Yankees' overall run differential over the last 11 games is positive.  They've scored 43 runs and allowed just 40.  It is the distribution of these runs, however, that tells the real story.  In their 8 losses, they've scored just 24 runs; they've scored 19 runs in the 3 wins.

- HR Allowed: 12.  It's not the worst number in the world, but it's still more than 1 a game, and considering that 11 of the 12 homers given up have been by the starting rotation, it's a sign that the long ball is still a major issue for the Yankee starters.

- RISP Struggles: 20-82 (.244) with 69 team LOB in the last 11 games.  Again, not quite as awful as the RISP Fail problems from earlier in the season, but still not a number that correlates to winning baseball games.  When you put that many runners on base, you need to drive them in.

There appears to be something off with his swing mechanics because it's not like Robbie to hit so many grounders.  It's unfortunate that he had to start struggling right as the Yankees lost A-Rod, and probably not coincidental that his offensive struggles happened at the same time as the Yankees' collective team struggles.

- Strikeouts: As a team, the Yankees have struck out 94 times in the last 11 games.  Extra innings or no extra innings, good opposing pitching or not, that's just too many.  You aren't going to score a lot of runs, or drive in guys in scoring position, when you're whiffing that much.

- Timing of Runs Allowed: 40 runs allowed in 11 games is not bad, but it's been WHEN those runs are allowed that's been the problem and likely an explanation of why the Yanks have lost so many close games.  Of the 40 R allowed, 19 of them have been given up in either the first 2 innings or the last 2 innings (plus extra innings).  Expand that scope to include the 3rd and 7th, and the Yankees have given up 29 of their 40 total runs allowed in the first third of the game or the final third of the game.  Hard to win when you're always playing from behind early or not having a lot of outs to work with to come back late.

I could also gripe about some of Joe's bullpen decisions, namely his instance on taking David Phelps out to play matchup games when Phelps has been pitching out of his mind, but that's really only come back to bite the Yankees once (7/22).  The more appropriate bullpen gripe would be to point out how 4 of the 8 losses are at the hands of the bullpen and them giving up runs in the 9th inning or later.

The fact of the matter is that the Yankees aren't playing good baseball right now and they're playing even worse situational baseball, giving up runs and failing to score runs when it counts the most.  It's something that will more than likely reverse itself over time, but it would be nice if that time came sooner rather than later.  With A-Rod out, Andy setting back, and Teix looking at some missed time, the Yankee could use some good news and some good timing to steady the ship.
Posted by Unknown at 12:30 PM