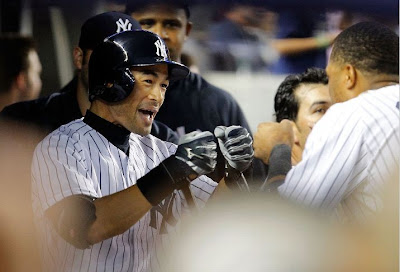 - Chavez: 2-3, 1 HR, 1 R, 2 RBI, 1 BB.  Speaking of extra duty, I know Joe was hesitant to make Chavez the everyday third baseman in A-Rod's absence, but he might have to play Chavez more if Teix is going to miss time.

- The "Heart" of the order: C-Grand, Teix, Cano, and Swish combined 1-15, 1 2B, 7 K, 6 LOB.  Teix gets a bit of a pass for coming into the game with a hurt wrist from Sunday night, and his 0-3 with 3 Ks makes me believe that's truthful, but there's just no excuse for this type of performance from the run-producing spots in the lineup.  Ichiro should never be driving in more runs than these 4 combined in any game.

We'll all wait for the news from Teix's MRI today hope that it's not TOO bad, and then I guess we'll hope that the remaining healthy members of the lineup can figure their shit out and try to get a win to turn this sluggish streak around.  Ivan Nova gets the start tonight against Chris Tillman.
Posted by Unknown at 6:58 AM