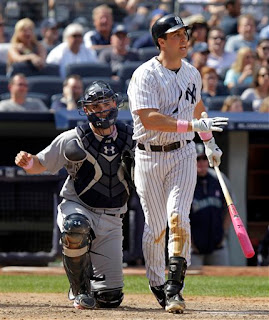 
But wait. It gets better worse. His PITCHf/x swing rates show that Teix is swinging at more pitches out of the strike zone than ever (29.3%), fewer pitches in the zone than he did last season (60.8%), and generating way more contact on pitches outside the zone than anybody would want to see (76.5%). Both his Swinging Strike (6.2%) and K (11.6%) rates are solid, but they are rendered meaningless because of the lack of walks and the amount of horrible contact that Teix is generating on his swings. His 16.8% LD rate would be a runaway career low if the season ended today and his 47.4% GB rate would be a new career high. Break those splits down to the L/R level and the picture becomes even uglier. Not only have his LD and GB rates from the left side gone in the wrong directions from where they were on April 19th, but those rates hitting from the right side are even worse (15.2% LD, 52.2% GB), suggesting that Teix is losing his ability to at least be a productive hitter from the right side of the plate.

This is a bad enough situation as it is. But it became even worse when Teix dropped this beauty of a quote after Monday night's game:

“I never really worry about the numbers because every year they’re there. At the end of the year I’ll put my stats up against any power hitter in baseball.”

After an offseason and Spring Training where he said all the right things about his declining performance and how he knew he had to do better, Teix falling back on the old "check the numbers" routine when he's hitting as poorly as he is just rubs me the wrong way. I expect Joe to say those types of things when asked about his guys not performing. That's his job. But coming from Teix, it's just a cop out. Nobody is concerned about what you've done in the past, Mark. Everybody knows that you have been up there with the best power hitters in baseball IN THE PAST, which is exactly why it's such a hot topic of discussion when you're wallowing around with the Cameron Maybins and Neil Walkers of the world in the present. Your track record doesn't mean squat when you're hitting at below replacement level.

Part of me wants to give Teix a little bit of a pass for the inflamed airway and coughing and sickness that he hasn't been able to shake (and shame on the Yankees for waiting until this past weekend to finally rest him if he really has been dealing with this since the first week of the season). But I watched Michael Jordan dominate a far more physically-exerting sport with the flu, so I don't think it's asking too much for Teix to stop flailing at every pitch out of the zone and beating 50% of the balls he puts in play into the ground. Sooner or later Teix needs to start producing and it would be nice if it happened sooner. The rest of the lineup hasn't been doing much either, and that fact is not lost on me, but for $22.5 million a season I expect a switch-hitting first baseman with power in his prime to carry the team every now and then and right now Teix is basically dead weight.

The season is almost 2 months old now, and it's time for the excuses to stop. Get yourself right, Mark, and start raking. The next time you tell everybody to check the scoreboard, it would be nice to see some numbers on there worth looking at.
Posted by Unknown at 9:30 AM

Well said, Brad. I like (liked) Teix's play, and his defense is still solid (nice stretch on Tue night for the win), but his offensive numbers are just awful. every time i think he's coming out of it, he GIDP. I still think he'll hit some dingers, but it's getting late early, as Yogi would say. except it's not early anymore.