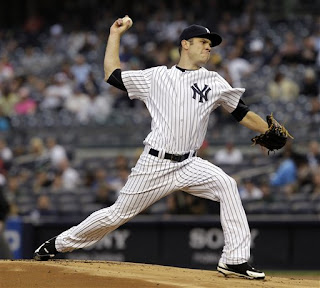 It's been a bit of a mixed bag season for Phelps.  In looking at his overall statistial profile, there are plenty of things that stand out both on the good side and the bad.  His 2.87 ERA, 8.04 K/9, 87.9% strand rate, and 47.7% GB rate are all solid, but his 3.45 BB/9, 4.49 FIP, and 15.6% HR/FB rate aren't as encouraging.  With the majority of the damage done against him coming in back-to-back late-April appearances against Bahhston and Texas, Phelps' xFIP of 3.83 is probably the most accurate representation of the job he has done this year.  He's eaten up a lot of innings in games where the Yankees have gotten poor starting pitching, saving the back end of the bullpen from overwork, and has almost always given his team a chance to win the game.

An overall good job like the one Phelps has done should theoretically have earned him a bigger role in this adjusted bullpen pecking order, but so far he hasn't really been given more high-leverage work.  After getting 2 days of rest following his 2 innings of work against the Reds last Saturday, Phelps remained on the bench Monday night while Joe mixed and matched with Cody Eppley and Clay Rapada to get through the 8th inning in a 1-run game.  Last night, with the Yankees up by 6, Girardi went to Phelps to relieve Andy Pettitte and close out the eventual 8-3 Yankee win.  It seems to me that the pitchers used in those 2 situations should have been reversed, and I wonder if Joe only sees Phelps as his long man/garbage time game finisher.  With the way the bullpen is currently constructed, I'd be reserving those roles for Eppley, Rapada, and Freddy Garcia, but that's just me.

With Phelps being younger, and probably better, than his other back end bullpen mates, this seems like the perfect opportunity to see what he's capable of and exactly where his ceiling lies as a reliable Major League pitcher.  When D-Rob does come off the DL, he's going to bump everybody back down a slot.  Before that happens, it'd be beneficial to know what Phelps can do pitching in the 6th or 7th inning of a close game.  He could be another late-inning weapon that the Yankees didn't even know they had.
Posted by Unknown at 2:21 PM