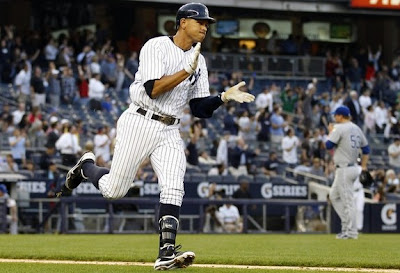 - Pettitte: 7 IP, 7 H, 2 ER, 1 BB, 8 K, W.  I've been impressed by how sharp Andy's stuff has been these last 2 starts.  He was throwing everything last night- fastballs, cutters, curves, sliders, changeups- and he was throwing them all well.  The Royals helped a little by hacking, but Andy's stuff was very good last night and it showed in the 17 combined strikeouts and groundouts.  Second time in a row through the rotation that he's had the best outing.

The Yankee offense is built on 2 things, patience and power, and they displayed plenty of both for the first time in a while last night.  The thought going in was that Will Smith could be a pitcher the Yankees could wake up against and they certainly seemed to do so.  That's 2 in a row, which is not a winning streak in my book, but it's a start.  Off day today so they can travel out to the West Coast.  Weekend series in Oakland starts tomorrow.
Posted by Unknown at 6:46 AM