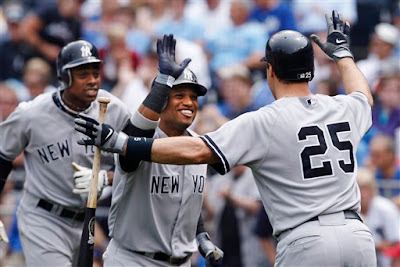 - Russell Martin: 0-5, 1 K, 4 LOB.  An ugly day after being the only hitter to do anything the game before.  I could have called out Teix here for being the only other starter to go hitless, but he at least drew 2 walks.

It's an off day for the Yankees today, as they get set to travel home and open a 3-game series against Tampa, who's opened a bit of a gap on them for 2nd place in the AL East.  The only Major League-related Yankee action today will be Brett Gardner starting his MiL rehab assignment.
Posted by Unknown at 7:05 AM