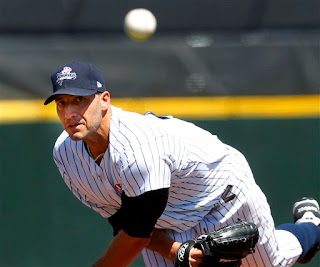 
Maybe I'm just misremembering here, but I don't recall Andy ever being as blunt as he was in his comments after his outing yesterday.  He doesn't strike me as a guy who would use the word "inevitable" to describe his return to the rotation after giving up 5 runs on 10 combined hits and walks in just 5 innings of work, especially when he's over a year removed from active competition as a Major League pitcher and can openly admit that his command is not where he wants it to be.  Andy has always been very honest when it comes to assessing his performance, and it surprises me to read that he thinks it's time to come up when his game isn't completely where he wants it to be.

I could be overanalyzing this, but based on the results of his last 2 starts, I think it's in the best interests of Andy and the Yankees to give him one more chance to work on finding his offspeed command.  I know the numbers aren't supposed to matter when dealing with situations like this, but in Andy's case and for what he was signed to do, I feel like they should matter to a certain degree.  Having to battle your way through 5 innings against Triple-A hitters could turn into getting knocked out of the game in 2 or 3 against a good Major League lineup, especially when you don't have a great feel for all your pitches.  And that's not the kind of result the Yankees need in their rotation.  They've already had to deal with those outings too much for my liking this season.

Andy said the Yankees aren't expecting him to come up and give them 7-8 shutout innings every game, and that's true.  But they also aren't expecting him to come up and give them 5 innings of 5-run ball every time.  They're already getting that from almost everybody else in the rotation without an initialed first name.  Andy was brought in to be an upgrade over a rotation option, not just a replacement, and the rotation isn't nearly as in need of his services as it was a week or so ago.  Freddy Garcia is out of the rotation and David Phelps is in, and Phil Hughes has looked much better in his last 2 outings.  They've each earned themselves one more go through the rotation, and that turn gives the Yankees time to give Andy one more tune-up start.

We all want to see the best Andy Pettitte possible, right?  So what's the harm in giving him one more chance to build up some arm strength, leg strength, and find his offspeed command?  He may very well be ready to pitch for the team right now, but if another no-pressure game allows him to better harness his command, then he's set to enter the rotation even more ready.
Posted by Unknown at 2:48 PM