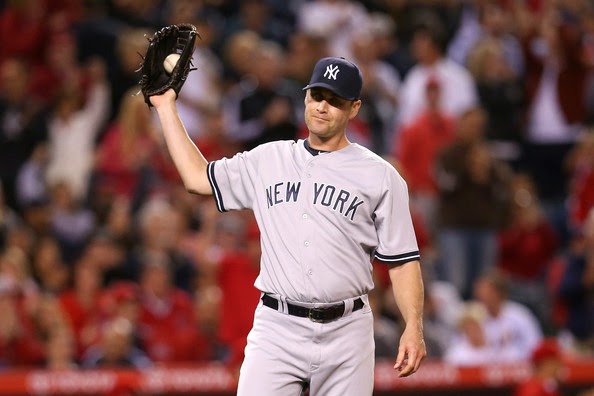 Looking at his performance against left-handed hitters, it seems like he should have a better line.  Lefties are hitting .263/.333/.263 in 21 plate appearances against him (.280 wOBA) with 0 XBH and 4 K.  Thornton was brought in to be the lefty specialist and for the most part he's gotten lefties out and prevented them from doing any real damage.  He's also kept the ball on the ground (career best 58.3% GB rate) and in the park (0 HR allowed).  What more can you really ask for from your LOOGY?

That GB rate may shed some light on an outside source of Thornton's high ERA.  The quality of defense being played on the Yankee infield has been amazingly brutal and last night Thornton fell victim to that in his appearance.  Right-handed hitting Eric Campbell laced a hard liner to third base in the 8th inning and Yangervis Solarte couldn't make the play at third, deflecting the ball into left field for a 1-out double.  It wasn't a routine play, but it was a play that a Major League third baseman should make.  Solarte didn't, Campbell came around to score, and Thornton was charged with the run.

With better defense behind him, perhaps a few of the GB hits against Thornton become outs and his line doesn't look so bad.  In an IP sample size this small, 1 fewer ER could make all the difference.  Of course, Thornton hasn't done himself any favors by walking 3 batters in 6+ innings and his 14.7% K rate is at an all-time low.  His transition to more of a 2-seamer pitcher hasn't made him any more difficult to hit.  He's throwing it almost 70% of the time and using his slider a lot less.  He's also gotten burned against righties when Joe has left him in to face them.  Of the 13 he's faced, 8 of them have reached base (4 H, 2 BB, 1 IBB, 1 HBP).

So what's the verdict on Thornton?  Is he pitching poorly or getting burned by bad luck and the SSS factor?  The lack of IP makes it difficult to pick one over the other, but I don't think it's a complete cop-out to say it's a little bit of both.  Thornton has generally done the job against lefties, but his timing when he hasn't has been poor.  Take last night for example.  After his bad luck deflection double against the righty Campbell, Thornton gave up a line drive single to lefty-hitting Lucas Duda after falling behind 3-1.  Those are the things that drive you crazy with a LOOGY, as do bases loaded walks like the one he gave up during the bullpen collapse last Monday in Anaheim.  Still, there are some things that suggest Thornton has been better than his ERA, so maybe it's best to give him another 6 weeks and see where he stands at the end of June.
Posted by Unknown at 11:30 AM