Keep Talking To Me, Ivan 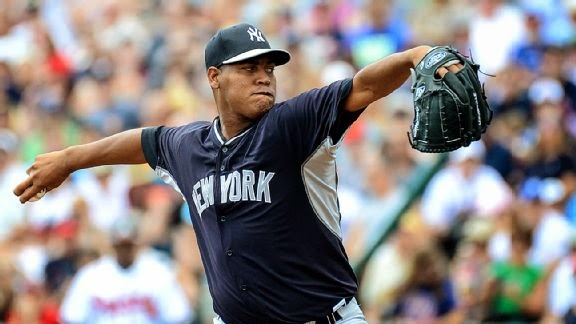 Coming off back-to-back shaky outings in which he was touched up for 17 hits in 9.0 innings pitched, Ivan Nova got back on track yesterday with a brilliant start against the Atlanta Braves.  He worked 6.1 scoreless, effortless innings, giving up only 2 hits, striking out 5, and not walking a batter for the 4th straight outing.  It was a start right out of Nova's 2013 2nd half catalog.  Fastballs located down in the zone, a lot more GB outs than balls in the air, and a big swing-and-miss curveball.  Brian McCann, who said he wanted to play in yesterday's game specifically for the purpose of catching Nova again, was gushing after the game, and any uneasiness people may have been feeling after watching Nova's previous 2 starts was quelled.

Once again though, it was what Nova said after the game that stood out to me more than what he did on the field.  I've watched enough Nova starts to know when he's got it and when he doesn't.  What I haven't seen enough of is Nova speaking maturely, like someone who is starting to figure out the finer non-physical points of being a good Major League pitcher.  Here's what he had to say to Chad Jennings after the game:

“You always want to have high expectations, even better than what you expect.  Every time you go out there, you expect more out of yourself. Pitching the way I did last year in the second half and knowing what I did, I think I’m old enough to know what I’m doing. I've just got to keep my focus. I know it’s hard sometimes. Anything can happen. The way I look, it’s 35 starts that I want. I just think of it like 35 days I've got to be 100 percent, trying to have my best start every time out. It’s just 35 days for me.”

Dig it.  Love it.  Need more of it, Ivan.  You keep pairing that kind of talk with the kind of pitching you put on display yesterday and you're going to have yourself a nice little season, probably a nice big new contract coming your way too.  I touched on this briefly a few weeks ago, but I'm really excited by this apparent mental and emotional transformation that Nova has undergone.  He isn't talking like a young guy trying to come up with an explanation for what went right or wrong or not acknowledging fault when he didn't perform well, like the Nova we saw (and heard) in 2011 and 2012.  He's talking like a veteran, somebody who knows what they've done wrong, knows what they have to do to be right, and is focused on making the right happen.

There's so much time spent analyzing the numbers, the mechanics, and the physical side of baseball and justifiably so.  You aren't going to be a good player if you don't have some tools and it's not difficult to look at stats and know which ones correlate to good players and which ones don't.  Sometimes the mental side of the game gets a little overlooked as an evaluation criterion, and in Nova's case I think that's the most important part to determining his success this year.  We know he's a big, strong guy with plus stuff and we've seen the numbers when he's on and when he's off.  What we haven't seen is him carry himself like a calm, mature, focused professional pitcher on a consistent basis, and what he's been saying about his starts and his approach this year makes it sound like he's finally adding that to his makeup.

I used to hate listening to Nova talk and reading his quotes after his starts because he always came off like someone who either didn't get it or didn't want to get it.  If he's going to keep talking (and pitching) like he's been this spring, I'm going to be all ears.
Posted by Unknown at 10:30 AM