2014 Season Preview: What We Know And What We Don't Know (The Bullpen) 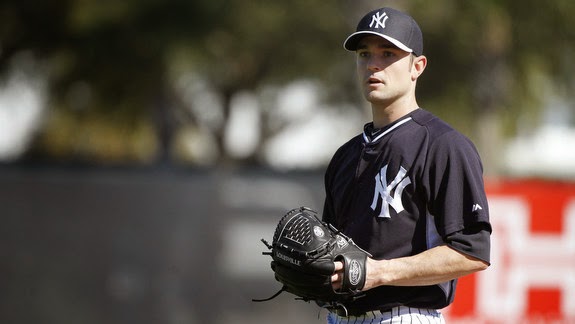 With a few exceptions here and there, the bullpen has been the stronger part of the Yankee pitching staff for the last few seasons.  That'll happen when the greatest closer in the history of baseball is holding down the fort for the 9th inning.  But it's more than that.  The Yankees, for all their faults in building up the rest of their roster, have been very good at putting together their bullpens through multiple sources.  They've generated some good homegrown relievers, they've signed or traded for guys who have provided above-average pitching production in late-game innings, and they've been masters of finding undervalued assets and getting decent production from them before cutting bait and moving on.  A lot has changed from the last few seasons heading into this one, however, and those changes could have a major impact on the look and overall performance of the bullpen in 2014.

It still feels a little strange not having Mo around at Spring Training and not including him in any ST posts.  The Yankees got to see him and honor him one more time in his native Panama last weekend, but for the first time since 1995 they will play a season without Mariano Rivera on the roster.  For the first time since '97, they won't have the luxury of Mo in the closer spot, the surest thing there's ever been in the history of closing out the 9th inning.  It's still incredible to think of how long he lasted in that role as other closers came and went and every other team rotated through multiple guys.  Don't think we'll ever see anything like that in baseball again.

Mo's retirement finally cleared a path for David Robertson to take over the Yankee closer throne, and after a few years studying and learning by Mo's side, D-Rob is as ready as anybody to take on that burden.  He's quieted his delivery, he's improved his command, and he's incorporated the cutter as his #1 pitch over his 4-seamer.  He's the closest thing to Mo that we're ever going to get and his ST results thus far (4 IP, 1 H, 1 BB, 0 R, 5 K) should leave no doubt that he'll do the job this year.  What he does beyond this season is the real question.  D-Rob is in the final year of arbitration and he's already due a hefty raise given his past performance and new role.  That price is only going to go up once the season starts and so far the Yanks haven't been active in trying to work out an extension with him.  The time to make that happen may have already passed, so what happens with D-Rob after this year will be a major storyline next offseason.

What We Know- Boone Is Gone

For as much as people dumped on him and never seemed to like him, Boone Logan was very good in his 4 years in the Bronx.  Never had an ERA above 3.74, never had a FIP above 3.82, struck out 202 batters in 176.0 IP, and held left-handed hitters to sub-.290 wOBAs in 3 of 4 seasons.  He was perfectly positioned as a LOOGY and serviceable against righties most of the time.  That 4-year run earned him his big new contract from the Rockies, a contract that the Yankees were wise to not match considering his elbow troubles, but I think Logan was underappreciated while he was here and will be missed more than people may think now that he's gone.

What We Don't Know- If Matt Thornton Can Be Better

How much Logan will be missed will depend on how Thornton does as his LOOGY replacement.  He came at a much lower price in terms of years and dollars, and at age 37 and showing signs of decline it's easy to understand why.  Thornton has gone from a flamethrower who was equally devastating against righties and lefties as recently as 2011 to a much more balanced 4-seamer/2-seamer/slider guy who's most effective against lefties in 2013.  The velocity and strikeout numbers are trending in the wrong direction for Thornton, and he's been iffy at best in his ST appearances- 7 H, 3 ER, 1 K in 2.1 IP and has allowed 3 of the 4 left-handed hitters he's faced to reach base.  The Yanks don't need him to be what he was in 2009-2010, but they do need him to at least match Logan's strong performance against lefties.

What We Know- The Rest Is Basically Up For Grabs

Mo's retirement didn't just open up a spot for the closer role.  It basically started a chain reaction of role re-defining down through the entire 'pen, and with the Yankees not committing much FA money to add quality Major League depth there are a lot of roles that have yet to be nailed down.  The setup man role that D-Rob vacated isn't set in stone, nor is Thornton's LOOGY spot, and there isn't a single middle or long relief job that's been given to any of the players still in camp.  It's a departure from the consistency and clearly-defined structure of recent Yankee bullpens, and another sign that the times are changing in Yankeeland.

What We Don't Know- Who Will Step Up To Take It

Shawn Kelley is the setup man to start the season, but he's hardly a proven commodity.  His command issues and flyball tendencies could make him less than ideal for the job, and he did struggle with those problems at the beginning and end of last season.  The middle relief corps behind him looks like it's going to be headed up by Preston Claiborne and David Phelps, each of whom has had success in limited sample sizes and each of whom has ceilings low enough to make them less than a sure thing in those roles.  The one thing the Yankees aren't short on is depth for these spots, and guys like Dellin Betances, Matt Daley, Cesar Cabral, Mark Montgomery, and maybe even Jose Ramirez and Manny Banuelos could all see time in key middle relief roles if the projected season starters don't live up to expectations.