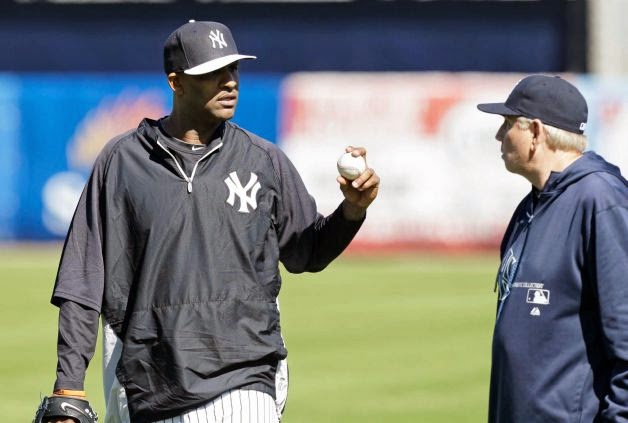 For the 3rd straight year, the Yankees will open the season with Carsten Charles Sabathia and Hiroki Kuroda at the top of their rotation.  Both pitchers have proven to be incredibly valuable and reliable in their time in pinstripes, and because of our familiarity with them there's not much to discuss about what type of pitchers they are.  They're both veteran guys with tons of experience pitching in Yankee Stadium, pitching against AL East competition, and pitching in pennant races and postseason games.

The familiarity with who they are is nice, but it's the uncertainty about what types of pitchers they're going to be in 2014 that's the bigger issue.  CC is 33 years old and coming off the worst season of his 13-year career.  He was one of the statistically worst pitchers in MLB in the 2nd half last season and his struggles with velocity and command have him on very unsteady ground as he prepares for this season.  His early ST results have been mixed, with the one common theme being low fastball velocity.  Hirok, at age 39, is almost a lock to start the season strong and perform consistently well through the summer.  It's the finish to his season that's the big question, and his fade down the stretch in 2013 was more pronounced than in 2012.  How CC bounces back from his horrible year and how Hirok holds up over another long season are arguably the 2 biggest questions facing the rotation right now.

What We Know- Who The Next 2 Are

While the old guard still stands at the top of the rotation, the potential future guard resides below them in the next 2 spots.  Ivan Nova has been a roller coaster in his MLB career to date, the latest fluctuation in his production being the best "up" he's had yet in his strong finish to 2013.  Masahiro Tanaka is the new kid on the block, and at 25 years old with the track record, reputation, and pitch mix he possesses, he's got legitimate future ace potential.

The Yankees would love nothing more than for Nova to repeat his 2013 2nd half over a full season and for Tanaka to make a smooth transition to the MLB game and show off that future ace potential over 30 starts.  Production like that from those 2 could give the Yankees one of the best rotations in baseball even if things don't go as planned for CC and Hirok.  There are a lot of hurdles that have to be overcome to make that happen though.  Nova has to be more consistent with his fastball, more efficient in his strategy, and more mature in how he handles himself in situations of adversity.  Tanaka has to show he can adjust to the smaller ball, shorter turnaround time between starts, and better quality of hitters in MLB.  And both of them need to stay healthy.  The degree to which they're able to do all of that will give some insight as to how prepared they are to step up in 2015.

Part of the reason the Yankees expanded their annual ST 5th starter competition to 4 pitchers this year is because they actually had 4 pitchers who were qualified for the job.  In Michael Pineda, David Phelps, Adam Warren, and Vidal Nuno, the Yanks have 4 young pitchers who have proven themselves in one capacity or another of being worthy of handling the 5th starter job.  Pineda was actually traded for with greater things in mind before he got hurt in the spring of 2012, Phelps and Warren were consistently solid MiL starters and have shown the ability to handle spot starts on short notice, and Nuno is an undervalued asset who's done nothing but excel in every role he's been handed since joining the Yankees.  With the exception of Pineda, each of these pitchers made at least 2 starts last season.  The organizational depth in the rotation hasn't been this strong in years.

It's a good thing the Yanks are this deep at the back end of their rotation because the 5th starter spot is almost always a revolving door.  Pineda is head and shoulders above Phelps in terms of winning the job for Opening Day after his strong showing against the Red Sox yesterday, but that does nothing to guarantee that he'll hold the spot down for the full year.  Given his shoulder situation and the Yankees' plans to limit his workload, I'd say it's close to a guarantee that he WON'T hold the spot down all year.  Phelps is going to make a few starts, Nuno too, and there could be additional spot starts up for grabs if anybody from the other 4 in the rotation gets hurt and has to spend some time on the DL.  No 5th starter spot is ever guaranteed and that trend won't be changing this season.