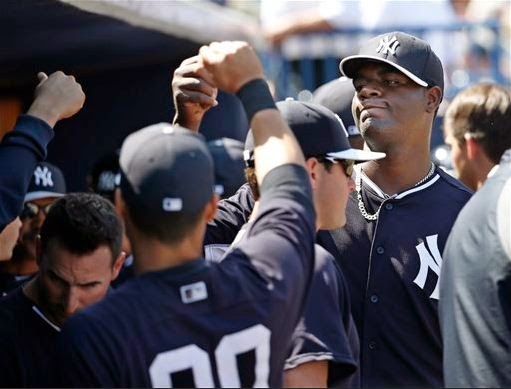 It's a simple matter of hope.  Pineda's strong outing yesterday, against an admittedly C-level Red Sox lineup, inspired more hope that he can come back and be an effective Major League starting pitcher, maybe even better than he was in 2011.  Back then Pineda was mostly a thrower, 90% fastballs and sliders, and he got by on the strength of his 4-seamer velocity and sharp slider break.  He didn't have any kind of reliable 3rd pitch and he didn't really need one as a rookie who teams were unprepared to face.

Now look at where he is after yesterday.  Fastball velocity isn't what it was but it's getting better, his changeup is much improved and much more useful than it was in its infancy 3 years ago, and he appears to have really harnessed the feel for his slider.  He was throwing it over the plate for called strikes yesterday and then burying it in the dirt with 2 strikes to get swings and misses.  This wasn't just a young guy throwing a good slider, it was a pitcher deciding what kind of slider he wanted to throw and where and then executing it perfectly.  All that time spent doing rehab throwing, bullpens, and MiL games last year plus this past offseason of more throwing looks like it did Pineda a world of good.  Whatever he may have lost in terms of juice on his fastball, he's made up for by improving the quality of his offspeed pitches and refining his command.  Based on these early ST small samples, these last 2 years of missed time actually made him a better pitcher.

So at age 25, with his shoulder healed, his pitching repertoire polished, and his prime ahead of him, the future still looks very bright for Michael Pineda and the Yankees.  And even if it all falls apart from here, the hope he's inspired that he can come back and contribute is far better than the combined on-field results of Jesus Montero and Hector Noesi.  Sure, they may have actually played in games for the Mariners these last 2 years, but what have they really given the Mariners in those games?  -1.4 combined fWAR, 2 last place finishes in the AL West, about 40 extra pounds this spring, and 2 extra spots taken up on the 40-man roster.  They've contributed less than nothing, and last time I checked nothing was still more than that.

This doesn't even factor in Jose Campos, who's had a slow go of his own since joining the Yankee farm system.  But he's icing on the cake at this point.  Pineda was and is the prize of that deal and after 2 long years it looks like the Yankees are finally going to cash in.  They've already won the trade based solely on the fact that neither of the players they got have turned into complete pieces of crap.  If Pineda continues on the path he's on this spring, a few years from now this trade could look like another Swisher-type steal.
Posted by Unknown at 11:30 AM