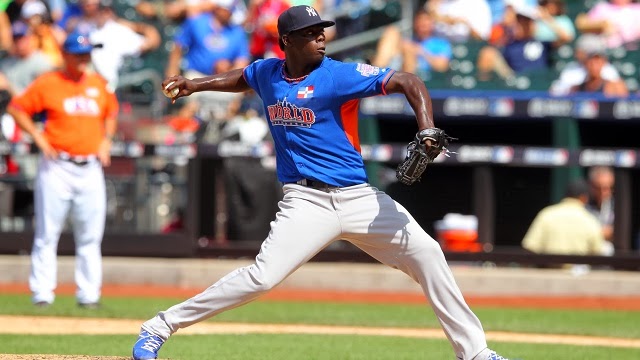 Katoh didn't come with any of the hype that the 3 Yankee 1st rounders in last year's draft did, and there were some who thought he was a big reach as a 2nd round pick.  All he did to silence the critics was hit .310/.402/.522 (.434 wOBA) in 215 GCL plate appearances and showcase the plus defensive skills that already had scouts pegging him as a long-term second baseman.  Rookie League numbers can be deceiving though, and that's why I want to see what Katoh can do against a better level of competition.  I also want to see how his body and his power hold up over a longer game schedule, but with him only being 19 years old it sounds like the Yankees are going to take it slow and send him to SS Staten Island to start the year.

Prospect Who's Probably The Next Dellin Betances- Rafael De Paula

It was a tale of 2 seasons for De Paula in his first full-season experience in 2013.  He thrashed Low-A hitters to the tune of a 37.5% K rate in 64.1 IP, then struggled mightily with his command in High-A ball (30 BB in 49.0 IP) and got hit around pretty good (6.06 ERA).  Opinions on De Paula vary widely from scout to scout and fan to fan, mainly because this past season was our first real look at the guy.  The stuff is definitely there and he showed he can get guys to swing and miss at his fastball and slider when he's locating them.  But as a 22-year-old who's missed a lot of development time, his mechanics are sloppy and he doesn't repeat his delivery well.  Those are the 2 things that  Betances never overcame on his way to being converted to a reliever, and while De Paula is not the physical freak that Betances is I could see the same problems hindering him as he gets to the higher levels.

Prospect Who's Down to His Last Shot- Cito Culver

Some might say he's already used that shot up and he's off the board as a legitimate prospect.  I think there was just enough in the finish of Culver's 2013 campaign to keep him on the map.  He ditched the switch hitting approach in his return to Low-A Charleston and that returned some minor dividends (.309 wOBA in 466 PA compared to .293 in 550 in 2012), but it was what he did when he was promoted to Tampa that really stood out.  .355/.394/.484 (.403 wOBA), 6 XBH, and 13 R scored in 16 games, finally some real signs of offensive life after almost 4 years in the system.  He's still a long way away and his ceiling is probably a utility bench player at best, so I'm not too excited.  A strong year at the plate, however, and maybe that ceiling starts looking like a more realistic goal.

Prospect I Think Will Surprise Some People This Year- Manny Banuelos

I'll just come right out and call this a hunch.  I don't know why I think it's going to happen, I just have a feeling that Banuelos is going to have a good year and remind everybody why he was the top prospect in the system not too long ago.  Maybe I'm just holding onto the memories of his dominant lower level years, maybe I think the elbow problems were the cause of his loss of command and he'll get that back now that he's healthy, I don't know.  What I do know is I have faith in ManBan this year and it wouldn't surprise me at all if he was tabbed to make a mid-to-late season MLB spot start.

His elbow injuries are behind him.  He was handled with extra care all of last season, resulting in only 87.0 IP in 26 appearances.  Those 87.0 IP represent his career high right now and he's going to turn 22 this summer.  Time to let the kid pitch for real again and see what he's really got.  The tools are still there, but we're never going to get a good idea of what they can amount to if he's pitching 4-inning starts in Charleston all the time.

It may seem strange to suggest that the player almost universally regarded as the top prospect in the Yankee system and the only one to make the major top 100 prospects in baseball lists needs to have a breakout season, but check Sanchez's numbers from the last few years.  .279/.330/.436 after being bumped to  Tampa in 2012, .254/.313/.420 with 13 HR in 399 PA in his return trip there this past season, and .250/.364/.380 in Trenton after another midseason promotion.  Since leaving Low-A ball, Sanchez has been good but not great.  His power has decreased noticeably from what it was in the lower levels, and while his natural hitting tools and improved defense continue to draw positive reviews from scouts, the on-field production hasn't totally matched up.  It'd be nice to see him come out and rake this year, hit for more power, and really make one of the Romine-Murphy Triple-A tandem expendable.
Posted by Unknown at 11:00 AM