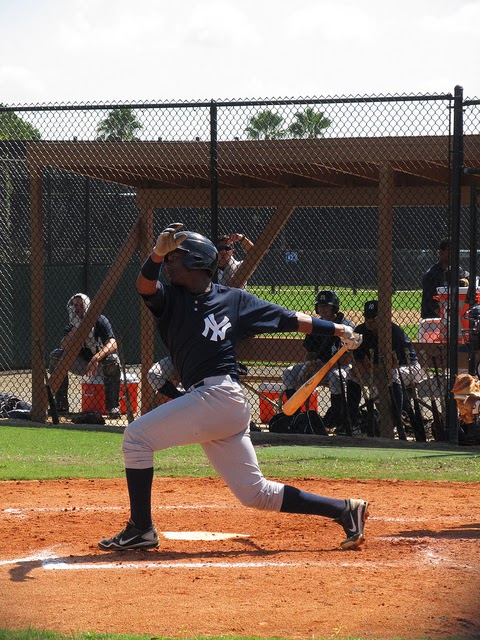 The final spot in last year's Top 30 went to Vidal Nuno, an older, unheralded starting pitcher who put himself on the map with a very strong 2012 season.  This year that formula was followed by Greene, a 25-year-old right-hander who finally broke onto the prospect scene after a big 2013.  Never known for his stuff or his control, Greene found both this past season and the results were impressive.  He pitched 154.1 total innings between Tampa and Trenton (26 starts) and worked to a 3.38 ERA/3.05 FIP, with 137 K and only 30 BB.  Greene is good-sized at 6'4"/210 and he works with a solid 4-pitch mix of low-90s 4-seamer that can be dialed up when needed, sinking 2-seamer, slider, and changeup.  He was added to the 40-man this offseason and I'm going to be aggressive and assume he gets bumped up to take the 5th spot in the Triple-A rotation.  If he shows that his 2013 season was the real deal, he's could find himself on the Major League radar as early as this year.

Drafted in the 5th round in 2012, Refsnyder is a polished college player who struggled a bit to find his game after being assigned to Low-A ball.  Some offseason work to improve his defense at second base put him in a better position to start 2013 and he responded by raking in his return to Charleston (.434 wOBA in 13 games) and then playing well enough upon his promotion to Tampa that more highly-touted prospect Angelo Gumbs got demoted.  Refsnyder will never hit for much power, but he possesses a plus hit tool, a smooth swing, and a good approach at the plate, all of which were on display in his .283/.408/.404, 15.4% BB rate/13.8% K rate performance in Tampa.  Turning 23 before the start of the season, Refsnyder has plenty of time to further develop his hitting approach and defensive skills at second and should be on track for a mid-season promotion to Trenton.

Gamel fell in the "first 5 out" portion of last year's list and he makes his way onto this year's after another solid all-around season.  After posting a .339 wOBA and little power in Charleston in 2012, Gamel improved his offensive output across the board at High-A Tampa this past season, hitting .272/.352/.396 (.345 wOBA) with 3 HR, 4 3B, 28 2B, an 11.3% BB rate, and 21 SB in 26 chances.  He also played a pretty good corner outfield, raising the belief I've always had that he can be a productive 4th OF in the Majors.  Gamel did enough in Tampa to earn a late-season promotion to Trenton, where he'll start the 2014 season after struggling to adjust in 16 games.  He's no All Star in the making, but Gamel still reminds me of Brett Gardner in that he has enough going for him baseball-wise and enough natural athleticism to become a productive player.  An uptick in power this season would be a very encouraging sign.

Our first returnee to the list, and one who almost didn't make it.  I was excited for Cote's 2013 season after he tore it up in limited GCL action in 2012.  Keeping with the slow and steady approach they've taken since drafting him, the Yankees elected to send Cote back to the GCL and another injury-shortened season had me thinking about dropping him to the "first 5 out" group.  When I looked at his numbers again, I decided to give him a pass.  In 28.0 IP over 9 GCL appearances this past season, Cote gave up just 18 hits and 5 BB, 3 ER (0.96 ERA), and struck out 20.  In his 2 years in the GCL he's given up 6 ER in 55.2 IP with a 5/1 K/BB ratio.  He's still young at age 21 and still relatively inexperienced.  He's still got top shelf stuff and a high ceiling, but he needs to stay on the field and start building up some innings in 2014.

Andujar was the crown jewel of the Yankees' 2011 international free agent class, signing for $750,000 out of the DR and immediately jumping to the GCL as a 17-year-old in 2012.  He didn't do very well that year (.285 wOBA in 191 PA), but was much better this season (.323/.368/496 in 144 PA).  Now 18, Andujar is a high-ceiling prospect with a lot of tools.  He's 6'1"/180 with a frame that should take on more muscle, he's got advanced hitting and pitch recognition skills for a player his age, good power that could develop into plus power with more seasoning, and he's got some speed and plus defensive skills.  Scouts are already saying they think he can stick at third and if his body and hitting approach develop he could very easily be a consistent 30+ HR hitter.  I still have to see him translate all these tools into something more than just rookie ball though. If he produces in a full-season league in 2014 he's going to rocket up a lot of boards.

I don't really know how to feel about Gumbs.  On the one hand, I want to pat myself on the back for not buying into the hype after 2011.  On the other, I'm bummed that he had such a bad year because I was secretly hoping he'd prove me wrong and become a legit top 10 prospect.  And when I say it was a bad year, it was a BAD year for Gumbs.  He hit .214/.265/.302 in 170 High-A PA to start the year and was bad enough that he got demoted back to Charleston where he wasn't much better (.213/.261/.351).  In fairness to Gumbs, he did battle injury problems all year, including a broken finger.  But this was the second straight year that happened and you can't afford to be injury-prone when your offensive game needs a lot of work.  Gumbs still has tremendous bat speed and plus athleticism; there's no shortage of tools.  He needs to start turning them into some real offensive production and he needs to stay on the field.

The Yankees have been slow and deliberate bringing Mitchell along since drafting him in 2010, never pushing him up a level mid-season and giving him extra time to work on his delivery and command.  Up until this season, Mitchell hadn't rewarded them with much beyond consistent inconsistency.  His stuff remains his greatest asset but he's still yet to fully harness it and maximize it.  2013 was a step in the right direction though, as Mitchell pitched to a 3.47 FIP (5.12 ERA) in 126.2 innings (23 starts) at High-A Tampa.  His strikeouts took a hit (18.3%) but he also cut down on his walks (9.3%) and earned a late-season promotion to Trenton where he allowed 4 ER in 3 starts.  He'll return to Trenton looking to build off that strong finish, and if his command improvements hold he's a fringe candidate to vault into the top 10 next year.  As it is, he probably would have been 18-20 this year if there weren't so many lower-level guys who had strong debuts.

Nuno is definitely too old to be considered a prospect by normal standards.  He's 26 now and he'll turn 27 before the end of this season.  He's also an atypical prospect case because of his late bloomer status and he had the kind of year, injury aside, that puts him right in the mix for a Major League rotation or bullpen job.  Nuno started off 2013 white hot, giving up only 4 R and striking out 30 in 5 Triple-A starts before injuries forced him onto the Major League roster.  In 5 appearances (3 starts) for the Bombers, he pitched to a 2.25 ERA and 4.50 FIP and then spent the rest of the year on the shelf after being sent back down and hurting his groin.  To make up for lost time, the Yanks sent him to the AZFL and he pitched very well there (3.20 ERA/2.49 FIP in 19.2 IP).  He's never going to be overpowering and his Major League ceiling isn't very high, but Nuno can be a valuable asset in multiple pitching roles and should see some time with the Yanks this year.

One of the big-money international signings from 2012, Torrens looks to be the next in the line of high-ceiling international catching prospects the Yankees are adept at finding.  He was rated as the 2nd-best international prospect by Baseball America when the Yanks signed him for $1.3 million in 2012 and at age 17 he showcased a wide range of tools in the GCL this past season.  The overall numbers don't appear impressive (.241/.348/.299, 8 XBH in 204 PA), but the scouting reports and the fact that he was the youngest player in the league make them easier to swallow.  Scouts praise Torrens for his plus hitting approach and pitch recognition skills, something not often associated with 17-year-olds, and believe he can develop 20+ HR power as he matures.  He's relatively new to the catcher position and his blocking and framing skills need a lot of work, but he does have a strong arm.  It's too early to project anything long-term for Torrens, but he's got a very high ceiling and the Yanks will be looking for an Andujar-esque improvement at the plate in his return to the GCL in 2014.

With shortstop being a position of limited depth and skill in the organization, it wouldn't have taken much for Avelino to get noticed in 2013.  With what he did, he can consider himself noticed.  Signed for $300k in 2012, Avelino made his American debut this year after a strong showing in the DSL.  He hit .303/.381/.399 in 224 PA spread across both GCL teams and SS Staten Island and showed a knack for getting on base and making solid contact.  Still a few weeks short of his 19th birthday, Avelino drew high marks from scouts for a solid all-fields hitting approach and sound plate discipline.  What really stands out is his defense.  When named to the Top 20 GCL Prospects list by Baseball America (along with Torrens and Andujar), Avelino scored points for his range, footwork, timing, and instincts at shortstop while also registering plus arm strength.  Most think he's got what it takes to stick at the position and if he can add a little more pop to his bat it won't be long before people are recognizing him as the best SS in the Yankee system.