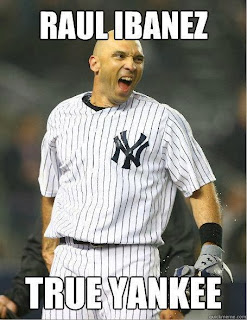 
The problem with making Ibanez the "regular" DH is the extra time the Yankees have to devote to that spot for other players.  Jeter is going to need a lot of DH time next season, as will Teix, as will A-Rod if he's around, and as will Beltran if he ends up signing.  The Yankees might not have the luxury of using a regular lefty-hitting DH against RHP next season and I'm sure they'd rather have a player who can be more valuable defensively than Ibanez to plug into the outfield on the days that those other guys are DHing.

Also, the big increase in K rate in 2013 and the fact that he turns 42 next year could mean that Ibanez is closer to falling off the edge of productivity than it might appear.  He's not a bad backup plan as a cheap DH/pseudo 4th outfielder, but I'd prefer the Yankees go after a younger, better 2-way outfield option and bump Ichiro to the bench to preserve that DH spot than immediately clog it up with Ibanez.
Posted by Unknown at 10:00 AM