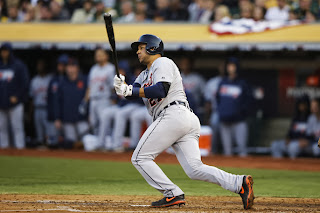 
Peralta is a right-handed hitting shortstop who, while known for his bat, may actually be a little underrated defensively.  31 years old and turning 32 next May, Peralta is a .267/.330/.425 career hitter (.330 wOBA) with decent BB and K rates (8.3% and 20.4% respectively) and enough pop in his bat to make hitters think twice about grooving him a fastball.  He's had double digit home runs in every full season he's played since 2005 and has exceeded the 20-HR plateau 3 times in his career, most recently in 2011 with the Tigers.  He doesn't offer up much speed on the basepaths and most of his offensive value is tied to his BABIP, but that hasn't prevented him from being an All Star in 2 of the last 3 years.

Peralta hits the market on the strength of a very good year at the plate in 2013.  He hit .303/.358/.457 (.356 wOBA) in 107 games for the Tigers before a Biogenesis-related suspension prematurely ended his season.  Tying that back to the last point about his BABIP, what makes Peralta a bit of an uncertainty is the wide variation in his year-to-year offensive numbers.  In the last 6 seasons, he's posted 3 wRC+ values of 112 or better and 3 of 91 or worse.  He's either been well above-average for his position or just slightly below average, and his career best offensive season is still '05 when he hit .292/.366/.520 with 24 HR for the Indians.

In terms of splits, Peralta tuned up left-handed pitching in 2013 with a .964 OPS in 136 PA while still holding his own against righties.  Historically, however, he's been much more balanced against righties and lefties, with not much of a split to speak of.  The wide swings in L/R splits along with the yo-yoing of his overall production from year to year make Peralta more risky than he looks at face value.  In his case, the whole isn't necessarily equal to the sum of its parts.

Knowing that, the defensive part of the Peralta equation needs to be looked at closer.  The eye test doesn't pass him or fail him when it comes to his range and his arm, but defensive metrics don't make him out to be above-average.  Over the course of his career he's been worth -16 defensive runs saved at short and has a -0.4 UZR/150 rating.  It should be noted that he's had above-average UZR ratings in each of the last 3 seasons, and since 2009 he's been worth 4 defensive runs saved.  The overall numbers aren't anything to write home about, but the trends make it appear as though Peralta has become a better defensive player over time and he can at least be expected to be at or around league average in the field.  It's also worth mentioning that Peralta has almost 1,800 innings at third base under his belt and could probably play that position again if needed.

An above-average hitter and roughly average fielder at short should be a hot commodity on the FA market and Peralta is expected to command a multi-year deal in the $10-12 million range.  What muddies the waters is that steroid suspension and the questions it creates about how "real" his 2013 production was.  When you pair the 'roid connection with Peralta's inconsistent yearly performance, those questions only grow and there's a very real chance the Yankees steer clear of him to avoid adding another player with PED connections to their roster.  He would be a great insurance option at both short and third and would come without the sacrifice of a draft pick, but I think Peralta is firmly behind Drew on the Yankees' big board and will only get real consideration if Drew goes elsewhere and Jeter suffers an offseason injury.
Posted by Unknown at 2:00 PM