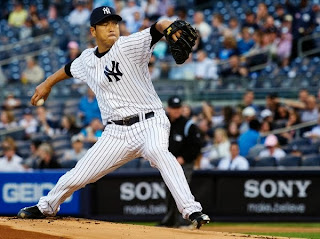 
The first and most problematic issue that reared its head in 2013 was right at the top of the rotation.  Coming off offseason elbow surgery and the resulting delay in his throwing program, CC Sabathia began what could be a very accelerated transition from staff ace to just another pitcher.  He battled his fastball from his first start of the season to his last, both in terms of velocity and command, and the results (4.78 ERA/4.10 FIP) were not pretty.  CC was more hittable than we've ever seen him, and even though he made 32 starts, threw 200+ innings again, and maintained his K and BB rates, there's serious concern about what kind of pitcher he'll be next year and moving forward on the remainder of his contract.

CC's struggles would have been an even bigger problem and definitely would have sunk the Yankees in the playoff race earlier had it not been for the work of the crafty veterans behind him.  Hiroki Kuroda and Andy Pettitte, both back for what could have been their last runs in pinstripes, were the true ace and #2 starter on the staff for much of the season.  Kuroda was as reliable, consistent, and occasionally dominant as he was in 2012, carrying the staff for most of the first half and early second half of the season.  His 3.31/3.56/3.60 slash line and 3.8 fWAR were better than last year and once again he made a full complement of starts.  Had he gotten more run support and a few more wins, he could have been a fringe Cy Young contender.

Pettitte struggled to get his back in good shape early, and looked like he could be in for a long year or early end in May.  Some adjustments to his between-start schedule and no setbacks got him on the right track, and once he was on it he never left.  Pettitte got stronger through the summer and final month of the season, picking up the slack left by Hirok's regression and finishing up with a 3.74/3.70/3.88 line and 3.2 fWAR that was more than respectable.  Andy was at his best in September, allowing just 12 ER in 41.0 IP (2.63 ERA) over his final 6 starts and ending his career with a complete game 5-hit victory.  Like Mo, he went out in style and played a crucial role in keeping the Yankees in contention until the final weeks.

If CC was the weak link of the 2013 rotation (and he was), the 2nd weakest link was once again the pair of young homegrown arms at the back of the rotation.  Phil Hughes and Ivan Nova continued to be thorns in the side of the Yankees' developmental reputation for different reasons.  Nova's was mainly health-based, as he missed a few months in the first half of the season with a triceps injury.  He was limited to 20 starts and 127.2 IP, but did rebound nicely in the second half with a much improved fastball/curveball approach.  Hughes was just hot garbage on the mound.  His 4-14 record was definitely not the byproduct of bad luck, more the direct result of how terrible he was.  He couldn't keep the ball in the yard (11.1% HR rate), he couldn't provide length (barely over 5.0 IP/start), and he did more to hurt his market value heading into free agency than help it.  If this was his last year as a Yankee, good riddance.

The health problems didn't affect the rotation as much as people might have expected them to, at least not in terms of missed starts.  The Yanks only had to piece together 19 more starts from their stash of rotation depth, 12 of them coming from swingman David Phelps.  He wasn't all that great in his work, but unheralded guys like Vidal Nuno and Adam Warren were in their spot starts.  At the very least they gave themselves a real shot at winning a spot in next year's rotation.  The one name that was notably absent from the group of spot starters was Michael Pineda.  Fully recovered from his 2012 shoulder surgery, Pineda was treated with extra special care by the organization and pitched probably only 70-80 innings all year including simulated games.  If and when he does make his first start in 2014, it will be the first time he's ever pitched a meaningful game as a Yankee.  Cheese and rice, what a horrible trade that was.

If you had to call it something, you'd be fair in saying 2013 was a disappointing year for the Yankee rotation.  They were good at times, but never as collectively great as they were for stretches of the 2012 season, and they certainly weren't good enough to make up for the lackluster offense.  We'll never know how differently things might have gone had CC been able to get his usual offseason throwing routine in, but chances are it still wouldn't have been enough to drag the team into the postseason.  There wasn't a lot of turnover this year, but with only 2 members of this year's rotation coming back for sure next year could be a completely different story.
Posted by Unknown at 3:30 PM