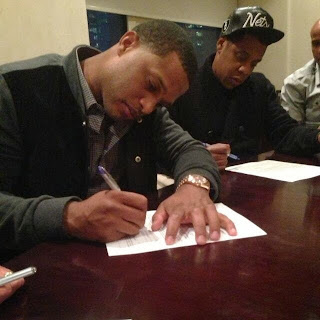 If for no other reason, the Yanks have gained the upper hand simply by being the only team with any reported interest in pursuing Cano this offseason.  There was a report that the Texas Rangers called New York at the trade deadline to ask about Robbie's availability and were rebuffed by Cash.  They were expected to be a big player for Cano during the offseason, but there haven't been any new reports connecting them to him.  With Ian Kinsler currently penciled into their second base spot and Jurickson Profar in the fold, they would have to make a move or 2 to free up space for Cano.  And based on what they did with Josh Hamilton, they're not exactly the type of team one would expect to hand out a big money/lotta years contract to a player already on the wrong side of 30.

After the Rangers, the Dodgers were the next team thought to be the Yankees' main competition for Cano.  They're the only team out there who could compete with New York on a money level, and their recent willingness to make big moves and add salary under the new ownership group has made them more Yankee-like than the Yankees themselves.  Magic Johnson said a few weeks ago that the Dodgers would not be pursuing Cano this offseason, a comment that many took as him blowing smoke.  Yesterday they made a move that signified a high level of truth to Magic's comments when they signed free agent Cuban infielder Alexander Guerrero.  They could still make a run at Cano, but their payroll is sky high and I can't imagine they paid Guerrero $28 million to be a utility infielder.

As Mike Eder mentioned yesterday, the rest of the teams who could be considered contenders (Phillies, Red Sox, Giants, Angels) already have money committed to second base and have a lot of money committed to their overall payrolls.  They aren't likely to add that much more to those payrolls for a player in his 30s.  Teams who have money to spend and who would be willing to spend it on a Cano-type, like the Cubs, White Sox, and Mariners, aren't attractive destinations for a player like Robbie who's coming from a winning franchise, and a team with a comparable winning pedigree, the Cardinals, are pretty well set at second base with Matt Carpenter and Kolten Wong.

The Tigers are an attractive option because of their obvious need for a middle infield next season.  But this talk about them trading Max Scherzer to help control the payroll makes it seem like they're on the verge of being sellers more than buyers.  Adding a contract like the new one Cano will eventually get would push them up into the $150 million range next season, and the bulk of it would be committed to guys (Cabrera, Fielder, Verlander, and Cano) who would be in their late 30s by the time their deals ended.  Detroit, like the rest of MLB, has seen how that's working out for the Yankees right now and may already be regretting the Prince Fielder contract.  They're more likely to try to move Scherzer, add offense through rookie Nick Castellanos, and fill the rest of their holes at reasonable prices to maintain their current payroll level.

Which brings us back to the Yankees, the only team with a major need for Cano, the money needed to sign him, and the clear homefield advantage as the only team he's played for in his professional career.  They might have had trouble competing with what the Dodgers could offer.  That won't be the case with the Mariners and Tigers of the world.  The developments around the rest of MLB in the last month has all but taken Cano's 10 years/$305 mil completely out of play, and the Yankees' 7-year offer at $23 mil AAV is starting to look like the best offer he'll get.  There might even be room for the Yankees to cut it down to 6 years if more serious potential suitors don't jump into the mix when free agency starts.

While the slow progress of the A-Rod appeal hearings may hold up the rest of their offseason plans, the Yankees' situation with Cano has gotten a lot more favorable in the last 3+ weeks.  Working out a new deal with him should no longer be as difficult or costly as it once seemed.  He's not re-signing for Dustin Pedroia money, so don't get too excited.  But if and when the Yankees do re-sign him, it won't be for another A-Rod anchor contract.
Posted by Unknown at 12:30 PM