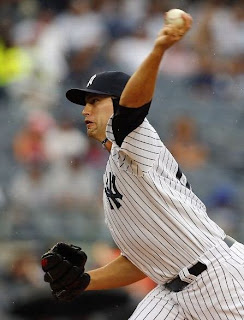 
For the Yankees, this should come as another marginal upgrade to their current roster that gives them a better chance to win the handful of games remaining for Hughes' rotation spot.  They've climbed back into somewhat serious Wild Card contention in the last few weeks and every game from here on out is critically important.  Huff may not have the raw stuff that Hughes does, but he's proven himself to be more effective in limited innings this season with what he does have.  If he gives up 3 or 4 runs in 5 or 6 innings of work, that's better than what Hughes was giving the Yankees, and the expanded bullpen behind him makes the transition less risky.  Joe can operate with Huff the same way he has been with Hughes.  At the first sign of trouble, yank him.

For Huff, this promotion provides a chance to audition for a starting role next year, perhaps even with the Yankees.  The 29-year-old lefty was a starter when he came up with Cleveland and started games for the Indians as recently as last season before being phased into the bullpen due largely to his ineffectiveness.  In 304.1 career Major League innings, almost 280 as a starter, Huff has a 5.18/4.82/4.95 slash line with weak K rates (12.7%, 5.12/9) and not enough command to make up for them (7.7% BB rate).  After being released by Cleveland earlier this year, Huff found something that worked starting in Triple-A, where he pitched to a 3.84/2.79 line in 68 innings with the RailRiders.  He's primarily a 4-seamer, 2-seamer, changeup pitcher who will mix in another offspeed pitch every now and then according to PITCHf/x.  Since he doesn't throw stuff with a lot of velocity or break, he needs to locate down and on the corners well to be effective.

For Hughes, this all but signals the end of the line for his Yankee career.  Despite the commitment they made to making him a qualifying offer after this season, I don't see how the Yankees can risk making that offer and taking Hughes back next season.  Their removing him from the rotation after pushing him back a start to avoid a good opponent is an admission to themselves and the rest of MLB that Hughes is not a good starting pitcher, and with how poorly he's pitched there's no reason to expect that any team would want to forfeit a draft pick and good money for his services.  The Yankees certainly can't afford to be handing out $14 million to a crummy pitcher they don't want if they want an easier time getting under their payroll threshold, and so after 129 starts, 715.2 innings, and a 4.72/4.49/4.43 slash line in the rotation, Hughes will end his Yankee career as part of the low-leverage bullpen surplus.

This is a bit of a risky move for the Yankees to make.  As bad as Hughes has been, there's little in Huff's Major League body of work that suggests he'll be better.  It's also a move that likely would have been made weeks ago if someone like David Phelps or Vidal Nuno was healthy, but they aren't and the Yankees had to do something.  In the interest of winning games and continuing to make up ground in the playoff race, they had to pull the plug on Hughes, wave the white flag in the battle to build up his free agent value, and make the switch to Huff.  If you're playing to win, and the Yankees certainly still are, this was a risk worth taking.
Posted by Unknown at 11:00 AM