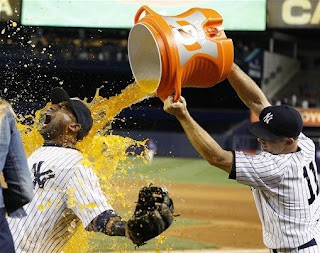 - Kuroda: 6.1 IP, 7 H, 4 ER, 2 BB, 7 K.  His stuff was sharper this game than the last few, but his pitches were still coming in a little flat and his command still isn't anywhere near where it should be.  Take it as a step in the right direction while acknowledging it wasn't a good start from the guy who's been the Yankees' best starter all year.

The Bombers have a chance to repay the sweep favor from a few weeks ago tonight, and they'll send CC Sabathia to the mound to get it done against rookie Erik Johnson.
Posted by Unknown at 6:48 AM