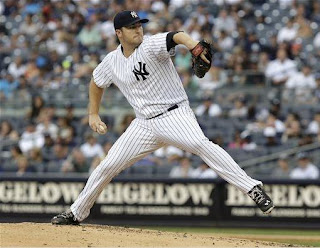 
Mike Axisa already delved into this a little deeper over at RAB this morning, laying out the 3 scenarios the Yankees have to choose from with respect to Hughes' spot in the rotation.  Personally, I like the idea of starting Hughes tomorrow to avoid the weekend series and just repeating what they did yesterday by having a fully-stocked bullpen ready to back him up if/when he starts to shit the bed.  It gives CC an extra day of rest before the weekend series and in theory gives the Yankees the best chance to win in each of those 4 games.

What I don't like is what a constant micro-management activity Hughes' starts have become.  He's been so bad that his market value has to be bottoming out right now and the Yanks have already committed to making a qualifying offer after this season.  I can't imagine Cash is going to be happy about offering up that much money to a below-average starting pitcher who the team has done everything to avoid in critical spots down the stretch, and I can't imagine teams are going to be willing to give up a high draft pick to sign that pitcher to a multi-year deal.  This is all seems like it's heading towards Hughes being back next year as a $14 million 5th starter/long reliever.
Posted by Unknown at 11:00 AM