"It Turns Out Rodriguez Not Only Wore A Helmet, But Also A Mask"

That's the subtitle of the article.  Seriously.

That's the first sentence.  I wish I was making this up.

"A-Rod has lost, despite the fact that he’ll now appeal. Not just in the court of public opinion. Not just in a court of law. Not just in the clubhouse, filled with newfound cynics who can’t believe a word he says anymore. Not just in his bulging bank account, which he cherishes above all. And not just in the record books, where his name will be glazed in a rainbow of provisos and dotted with a galaxy of asterisks."

A "rainbow of provisos"?

I can't even believe I have to break this gif out already.  We're just 2 paragraphs in.

"Alex Rodriguez has lost his platform and prerogative to advise, to surmise, to sermonize on any matter that requires a modicum of nobility. He has lost his line of credit with mankind."

You mean just now?  Just after yesterday?  That was it.  That was what lost him his line of credit?  Dude, have you even followed baseball since 2004?

"So instead of the emblem of decency, he was the avatar of deception."

What the hell is an avatar of deception?  Are you saying he's not even operating his own body and mind?  Because that's deep, man.  Deep and really stupid.

"Instead of bringing clean veins to the game he adored, he stained it beyond our most vivid nightmares."

Exactly when was A-Rod tasked with being solely responsible for "cleaning up" baseball?  He took advantage of the lax testing rules and scientific headstart just like hundreds of other players from his generation.  At what point did is job go from "be as awesome as your job as you can and make as much money as you can" to "be the spiritual savior of baseball and rid it of PEDs"?

And again with the implication that the game of baseball is squeaky clean and something to be treasured and preserved.  Classic A-Rod bashing talking point, but completely idiotic to even suggest if you have a basic understanding of the history of baseball.

"Rodriguez is, in every profound sense of the word, a junkie."

No, in most general senses of the word, he's not.

"Not in the simple sense you learned in school or at home of some poor mope selling silverware for a hit... "

Or not in any sense at all.  And who the hell would sell silverware for drugs?  You have to keep the spoons, guy.  What good would the drugs be to the junkies if they sold all their spoons to pay for the drugs?

"Rodriguez had more than enough talent but too much temerity to become the ambassador of our pastime. Rather than climb the ladder of history’s mistakes, he is lost in the forest of his malfeasance."

This sudden retroactive deification of A-Rod for the purposes of proving a patently false point is stunningly preposterous.  See?  I can use big words too.  Doesn't change the fact that blaming Alex Rodriguez for not doing something that he was never required to do is stupid and lazy.

"The cash was abstract, dots in a galaxy of digits."

"We never collected baseball cards to chart their paychecks to juxtapose salary and statistics. We were looking for heroes. Role models aren’t just for children."

"Rodriguez has a pathological disdain for the truth."

OK, "pathological disdain for the truth" is actually pretty good.  I'll give you that.  And that "forest of his malfeasance" thing sounded like something Damien Sandow would say, so props for that one.

"It wasn’t the poker games. It wasn’t smooching his reflection in the mirror. It wasn’t sunning in Central Park after notifying the Paparazzi. It wasn’t even allegedly flying a stripper around the country while his wife was either pregnant with or caring for his kids."

"I mean, it was those things, which is why every NY sports writer has penned this same basic A-Rod hate piece after every single one of those occurrences.  But those don't really count anymore.  Because steroids are the worst thing ever and taking performance-enhancing substances to enhance your performance at your job is something that nobody else in the world has ever even considered, let alone actually do."

" You signed another distorted contract with the Yankees... "

That they went out of their way to offer to you.

"... including a $6 million bonus for breaking every home-run mark in front of you, based on the assumption that you, unlike Bonds, were doing this in the spirit of fairness."

"... even at his most elegant, when he was a young colt galloping around the bases with a linebacker’s body and a shortstop’s alacrity." 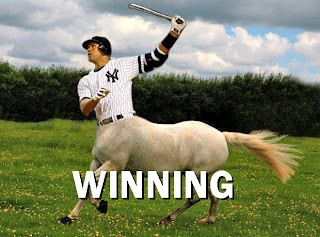 "Whether it ends in jail, in divorce or on the business end of Bud Selig’s pen, it had to end before it was supposed to. Whether it ends now or a year from now or two, it’s over."

Whew.  Thank goodness.  I didn't think I could take much more of that.  Guy really knows how to lay it on thick, and I could almost hear him turning the pages on his "word of the day" calendar as he wrote each sentence.  That was bru-

"It wasn’t enough to cheat. You had to lie about it."

Wait, what?  I thought it was over.  Why are you still writing?  What is this??

"The issue isn’t whether Rodriguez lies; it’s whether he ever tells the truth."

"Whether you view Rodriguez as a parable, a metaphor, a symbol, an allegory or just a cautionary tale... "

Or just a man who plays baseball for a living and got caught cheating at it.  Since that's really all he is.

"He was supposed to be the white knight of a new era, yet he did so much to make sure that won’t happen."

Steroids aside, I'm pretty sure the guy who became hated almost from the minute he signed his contract with Texas and almost universally-hated outside New York when he was traded to the Yankees was never going to be the "white knight" of any era in baseball.  Not when Derek Jeter was around.  You're getting your Yankees left side infielders confused.

"He signed another bloated contract to broach the billions, yet he did so much to make sure that won’t happen." 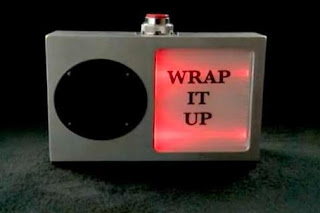 "... his employer has a phalanx of lawyers brooding over every permutation to peel him off the payroll."

Your thesaurus is showing.

"He has no home, no haven, no respite, only a voracious machine churning against him, the forest of his malfeasance, and a broken moral compass."

Pretty sure he's doing just fine with his $353 mil already banked and at least a chunk of the $100 mil still owed to him coming his way.  Why else do you think he's still around?  Alex is no fool.  he knows his reputation is ruined and everyone hates him and that MLB and the Yankees want him gone.  Why do you think he said what he said over the weekend?  Dude still wants to get paid and he's entitled to that since he signed the contract.  For $400 million, you can buy a new compass.

"Maybe it’s better that he spends his first night on foreign soil, in Chicago, standing all alone on the hot corner, a place he will occupy until he dies."

Wow, got a little dark there at the end.  But at least it's over.

You almost have to stand back and applaud an effort like this.  Jason Keidel didn't miss a thing.  He covered each and every major anti-A-Rod talking point that's ever existed, he took the highest of moral high grounds in instances where doing so was entirely uncalled for, he over-dramatized the "tarnished legacy of the game" aspect of the steroid debate, and he sprinkled enough flowery language in there to get a solid A- on any high school writing assignment.  Keep an eye on this kid.  Something tells me we're going to be reading slop like this for many years to come.