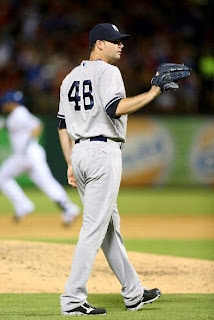 A closer look at his numbers in some key areas , however, tells a different story.  While his overall numbers look very good, Logan is sporting a noticeable reverse platoon split this season, with lefties posting a .313 wOBA against him compared to just .284 for righties.  He's also got unusually high home run rates (1.53 HR/9, 20.8% HR/FB) that have been responsible for most of the runs he's given up.  Most importantly, Logan's performance against inherited runners has been much worse than in previous seasons in NY.  Of the 38 inherited baserunners he's had to date this season, Logan has allowed 13 of them to score (34.2%).  By comparison, he allowed just 15 inherited runners to score of 64 last season (23.4%) and he's never had a percentage higher than 24.2% in his Yankee career.

For a specialist pitcher like Logan, whose appearances are usually no more than a batter or 2 in key situations, the most important things to do are win the lefty-on-lefty matchups you're supposed to win, keep the ball in the yard, and keep inherited runners from scoring.  Logan has struggled in all 3 of those departments this season, and it's flown largely under the radar thanks to his high strikeout count and atypically strong performance against right-handed hitters.  Although Logan's mistakes have been few this year, many of them have been big mistakes in big moments (see July 23rd against the Rangers).

He's the Yankees' premiere matchup pitcher and he's successfully made me look stupid for questioning his health earlier this year.  He hasn't been as successful in those matchups as he has in years past though, which could end up hurting his market value if teams take a close enough look.
Posted by Unknown at 4:00 PM