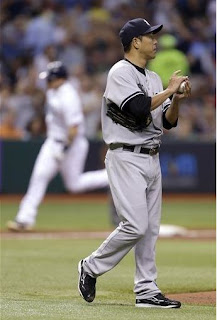 
Kuroda's shaky last 2 outings and his age bring back the question that was asked last year about whether he's starting to wear down late in the season.  September 2012 was hands down Hirok's worst month of the season (4.71 ERA/4.03 FIP, .371 wOBA against) and the questions about his energy level and workload as a 37-year-old starter were perfectly valid.  No reason those questions should change a year later at age 38, especially when he's had 1 recent start pushed back due to health reasons and Joe has done everything in his power to get him an extra day of rest when he can.  Kuroda's coming off a career high 235.2 IP last season between the regular season and postseason and he's on pace for another 200+ IP this season.  The guy's a proven stud when it comes to staying healthy and on the field, but he is human.

Checking Hirok's August splits from this year, there are some statistical suggestions that he's slowing down a bit.  Opposing hitters have posted a season best .352 wOBA against him this month (.299/.318/.495 tripleslash).  His ERA and HR rate are also elevated, though both are heavily influenced by that last bad outing.  His K and BB rate splits don't indicate much of a loss of stuff or command, and his BABIP against of .337 this month is abnormally high by Kuroda's standards, so there could just be some bad luck in play as well.

2 starts is hardly enough to declare that something is wrong with Kuroda.  He's only 2 weeks removed from tossing 8 shutout innings against the Angels and Friday night's start was a definite statistical outlier.  Keeping in mind his age, workload since the start of 2012, and September 2012 struggles, however, it's worth watching how he bounces back from Friday in his final start of August and how he pitches into September.  He's no spring chicken and it would be understandable if he was operating at less than 100%.
Posted by Unknown at 1:30 PM