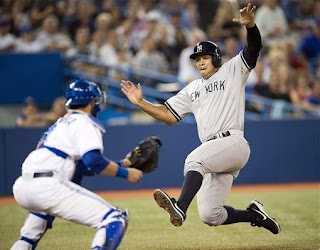 - Reynolds: 3-4, 1 2B, 1 RBI.  Got the start at second base in place of Cano and handled his business just fine there while putting together a 3-hit night.  He's been another nice pickup, albeit one that came too late.

- Kuroda: 5 IP, 9 H, 7 R (5 ER), 1 BB, 4 K.  Hirok's ERA has gone up over half a run in his last 2 starts, which gives you an idea of how awful he's been if you haven't seen it for yourself.  Velocity doesn't seem to be the problem, so I don't think his arm is tired.  Just lost the command of his sinker and the rest of his pitches have suffered as a result.

- Stewart: 0-3, 1 K, 1 LOB.  Maybe Kuroda was to blame for the cross-up in the 1st inning, but the pitch he threw was a fastball right down the middle.  How do you not catch that???  And then, as a supposed defensive specialist, how do you compound that problem by hitting the batter with your throw to first base?????  Putrid.  Get me Romine.

Yanks get an off-day today to travel back home and they best get it together for Friday night when Baltimore comes to town.  I'm sure they'd love nothing more than to turn out the lights on the Yankees for good this year.  CC Sabathia and Miguel Gonzalez are scheduled to be Friday's starting pitchers.
Posted by Unknown at 7:09 AM