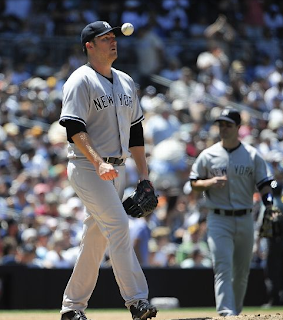 - C-Grand: 1-1, 1 RBI, 3 BB.  He's looked sharp these last 2 games.  A shorter learning curve getting back to his usual self would be tremendously helpful.

- Hughes: 2.2 IP, 6 H, 5 ER, 3 BB, 1 K.  Where do you even begin anymore?  Hughes has been worse in each of his last 3 starts and he's right down there with CC Sabathia in the realm of non-competitive right now.  Same stuff it always is with Hughes; doesn't need to be repeated.  Just frustrating that we still have to see it.

The Yankees are headed to Chicago for a series on their way back east.  It remains to be seen if Alex Rodriguez will be joining them in the starting lineup tomorrow.  Andy Pettitte will take the ball.
Posted by Unknown at 7:12 PM