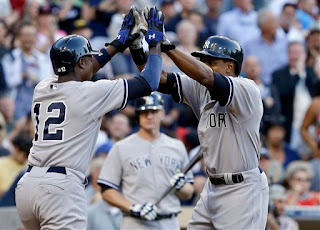 - Nova: 7 IP, 4 H, 0 R, 1 BB, 8 K.  Simply marvelous.  This new and improved version of Nova is better than the Nova from the end of 2011.  He's throwing the ball hard, he's hitting his spots, and his curveball has been unhittable.  Very encouraging for next season.

- C-Grand: 2-4, 1 HR, 2 R, 2 RBI, 1 SB, 1 K.  Nice little day at the plate for Curtis in just his second game back.  Nice to have that power in the middle of the order again too.  6 innings of barely anything against Ross and Curtis changed that with 1 fastball.  He needs to stay on the field for the rest of this season.