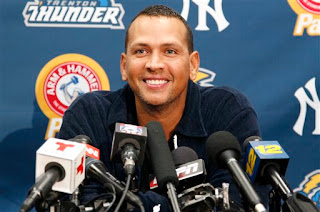 This is really all A-Rod has left and he knows it's basically him against the world.  Can't hate on a guy for taking that opposition head on.
Posted by Unknown at 12:48 PM

ya can;t hate him for talking tough..... but there's so much else to hate him for, that it doesn't matter.