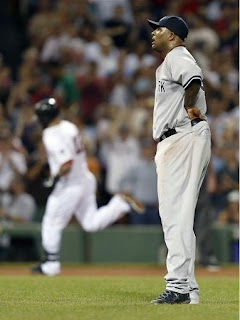 (Looks like a man searching for answers.  Courtesy of the AP)

Stop me if you've heard this one before.  CC Sabathia walks onto a pitching mound, struggles to command his fastball, and gets knocked around for a bunch of hits and runs.  It's been a common theme for CC from his first start this season to last night's stinker and it's starting to become a major problem for the rotation and the team.  His diminished velocity is old news at this point, and whether his command problems are due to natural age-related regression, a change in mechanics, an undisclosed injury, or a combination of the 3 is irrelevant.  What matters is that CC is 21 starts into the season and showing no signs of improving his game as he adjust to life without the plus heater.  In fact, he's gotten worse as the season has gone on.


After last night, CC has given up 15 runs (10 earned) on 17 hits over 9.0+ IP in his last 2 starts.  This comes on the heels of a pretty solid complete game 3-run outing against Kansas City on July 9th.  The inconsistency between starts and severity of the negative results when he has an off night have increased from the start of the season, when Sabathia actually posted a 3.36 ERA/3.96 FIP split in April.  His monthly ERA has increased every month since, from 4.14 in May to 5.11 in June to 5.40 this month, and his FIP splits have risen to 5.49 this month.  For the season, CC now sports a very pedestrian 4.37/4.20 slash and the trends in his BB and HR rates don't suggest he's turning things around.

CC has walked 9 batters in 25.0 IP this month, an average of over 3.00 per 9 innings.  That's his highest BB rate of the season by far.  He's also already given up 6 HR this month, tied for the highest of any month and looking like a solid bet to be the new highest with the big fella still scheduled for at least 1 more start this month.  He's now up to 23 HR allowed on the season, a new career worst for him, and he's given up 9 of them in his last 6 starts.  The expectation was that CC would start to trend the right way once his fastball velocity came up.  Instead he's giving up more hits, runs, and homers than ever, primarily due to his inability to locate his fastballs down in the zone.

What makes it even worse is the fact that CC still has a nasty slider and both his changeup and curveball have been effective pitches at times for him this season.  There's still plenty of good offspeed stuff there to get the job done, but not when he doesn't have a fastball to set them up.  If he isn't going to throw his sinker and 4-seamer harder - and despite increased velocity as the season has progressed, it's still not the type of swing-and-miss velocity he used to have - he needs to locate them much better down in the zone.  He didn't do that last night and the PITCHf/x breakdowns of those pitches shows that he hasn't done it all season.

Whatever the reasons are and whatever the potential fixes are, they need to be figured out in a hurry.  The Yankees are teetering on the edge of falling out of realistic postseason contention and if they are going to make it they're going to do it on the back of their pitching staff.  Hirok is holding up his end and Hughes and Nova are what they are, but Andy has been "meh" at best since coming off the DL and CC has been even worse.  The Yanks can't make it with 40% of their starting rotation pitching poorly, especially when one of those guys is their ace.

Beyond just 2013, it would be reassuring for the future to see Sabathia start to figure things out with his fastball before this season ends.  I believe it's still too early to declare him "not an ace" anymore, but that claim will gain validity if CC continues down this path for the remainder of the year.  At 33, the Yanks were counting on a few more big years from him before real regression set in and if that regression is starting now it's going to make the final few years of his deal brutal.  Coaches, writers, and analysts alike keep saying that CC will figure this out and get back to being the pitcher we've known him to be.  Quite simply, if that's going to happen it needs to start happening now.
Posted by Unknown at 2:00 PM