Prospect Stock Up And Stock Down: July 2013 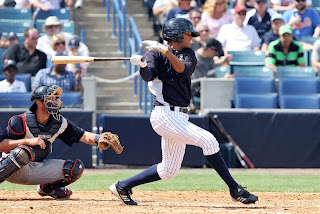 (Not a fun year so far for Mr. Williams.  USATSI)

It's been a while since I've done of these.  I said I was going to do a monthly MiL wrap-up this season back in May and then it didn't happen.  That one's on me, guys.  But I can't get too jazzed up talking about potential trade partners and targets just yet, so let's use this afternoon to catch up on who's been hot and who's been not in the last 2 months in the Minors.  It's going to be a rapid-fire round to make up for lost time.

Dellin Betances- He was on the way down back in May after he continued to flounder as a starting pitcher.  Since then he's been converted full-time to the bullpen and the results have been very good: 31.2 IP, 18 H, 11 BB, 8 ER (2.27 ERA), 41 K.  He's barely eligible to be called a prospect anymore, but Betances is doing enough to earn some late-season consideration.

J.R. Murphy- He was here last time for Double-A when he was raking to start the season.  That trend hasn't stopped since Murphy was promoted to Triple-A.  In 87 PA at the level he's hitting .307/.391/.507 (.400 wOBA) with BB and K rates comparable to what he posted in Trenton.  He's name is now on the tip of Joe and Cash's tongues when discussing the team's future and it will be hard to not call him up in September if he's still hitting.

Brett Marshall- More of a SSS gimme here than a true good job.  It's been a nightmare season for Marshall at Triple-A, but he's showed signs of turning it around lately.  In his last 3 starts he's allowed just 5 ER over 19 IP with 21 K and 4 BB.  Hopefully this is a sign that Marshall is figuring it out and is still a viable rotation candidate.

Melky Mesa- In a season of Major League offensive drought, Mesa has hit just .248/.275/.435 with a K rate of almost 40% in Triple-A.  He worked his way onto the prospect radar with a good year last year.  At his age, he's definitely off after this season.

Tyler Austin- It's been a rough year for most everybody at what was expected to be the highlight of the system.  Austin is the best representation of that.  After dominating pitching at 2 levels last year, he's been slow to adjust to the level of competition at Double-A.  He's still hitting just .257/.349/.373 on the year, with a K rate over 21%.

Ben Gamel- After posting a .339 wOBA in a full season at Low-A last year, Gamel is doing even better in his first season at High-A ball.  He's got a .346 wOBA and 115 wRC+ in 336 PA here, with enough pop in his bat to not be a pushover, improved K and BB rates, speed on the basepaths, and plus defensive skills in the outfield.  Working his way onto the radar as a 21-year-old.

Mason Williams- Some more nagging injuries, an early-season DUI arrest, some more negative reports and questions about his attitude on the field, and a season-long slump at the plate (.256/.334/355 in 316 PA).  Not a good year so far for the player some picked as the top prospect in the organization.

Daniel Camarena- 1 ER in 27 IP over his last 7 appearances, some starts and some in relief, with 15 K and just 2 BB.  The command his reputation carried is starting to show.

Angelo Gumbs- Recently bumped back down a level after getting hurt again and only posting a .258 wOBA for High-A.  Gumbs has started to hit again down here, no doubt trying to get called back up to where he started the season.  But it's basically been another year of spinning the tires and unrealized tool potential.

It's still a little early to say anything meaningful about the short-season leagues, but there's been a lot to like.  Expensive international signings Luis Torrens, Luis Severino, and Omar Luis have all shown flashes in the GCL, and 2013 1st rounder Eric Jagielo has already started pounding pitching at this level like he should.
Posted by Unknown at 12:55 PM