What Nova Needs To Work On 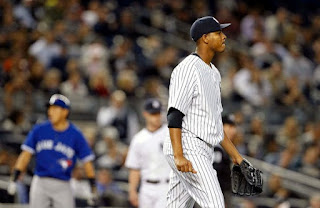 With his 15-day DL stint winding down and the make-up doubleheader against Cleveland scheduled for Monday, the prevailing thought is that Ivan Nova will be activated to pitch one of those games.  Joe didn't fully commit to it before last night's game, acknowledging that the team would first want to make sure Nova came through today's ExST outing without issue before making the decision.  Assuming the reports from that outing all come back positive, however, the combination of timing and situation makes too much sense for it not to happen.

Nova wasn't pitching particularly well prior to hitting the DL.  Joe's short leash was a clear indication that he had lost confidence in Nova, and rumblings had already started about the security of Ivan's rotation spot.  A return to pitch in a situation of need like a doubleheader is not a guarantee that Nova will get his rotation spot back, especially if he pitches poorly, but assuming he will be back and David Phelps is heading back to the bullpen here's what Nova needs to do to nail down that spot.

Nova drew some attention earlier in the spring thanks to the addition of a sinker to his repertoire.  As a pitcher who's gotten abused on poorly place 4-seamers, this change was expected to help ease that sting and Nova has focused on throwing more sinkers and curveballs this season (combined 54.8% of all pitches).  In the process of working in the sinker, it seems as though Ivan's slider has gone by the wayside and that's not good.  While Ivan has struggled to throw his curveball for strikes, his slider remains his best swing-and-miss pitch (14.8% whiff rate according to Texas Leaguers) and is still a more consistent out pitch.  In the same way that the new sinker can help supplement Nova's 4-seamer, throwing more sliders could help overcome the inconsistencies with his curveball and give Nova one more pitch to go to in different situations to keep hitters off balance.

Improve His Approach Against Right-Handed Hitters

Maybe it's a byproduct of him learning to work the sinker in with his 4-seamer, but Nova is getting absolutely torched by righties this season.  Last year he barely had a platoon split, giving up a .361 wOBA to opposing lefties and a .373 to righties.  In his limited innings this season, Nova's wOBA against is .286 for lefties and .491 for righties.  And this isn't a superfreak SSS occurrence where he's only faced 10 lefties; Nova has faced 41 right-handed batters and 38 left-handed.  The cause for this drastic reverse platoon split could be Nova's approach, which has been more 4-seamer heavy than against lefties and features a lot of those 4-seamers middle of the plate and out.  While his "sinker away/curveball down and in" strategy has been great in generating a lot of weak contact against lefties, Nova, like Phil Hughes before him, seems to be getting into trouble by not pitching inside with his fastball.  If he's going to lean on that pitch against righties, Nova has to locate it better to both sides of the plate and be willing to pitch on the inside corner.

Get Some Better Luck

There was definitely some bad luck in play in Nova's disastrous season in 2012, and if we're being fair to him there's probably a comparable or even greater dose of it in play in his 16+ innings this season.  He's struck out 18 batters in 16.2 IP, he's got a GB rate of 51.0%, and both his FIP and xFIP values are more than 2.5 runs lower than his 6.48 ERA.  Nova hasn't pitched all that well in his 4 starts this season, and Joe's quick bullpen trigger with him has been justified.  He also hasn't pitched as poorly as his ERA would lead us to believe, though, and a .449 BABIP against is Exhibit A of that.  Along with refining his approach, Nova stands to see improvement in his overall performance when his ball in play luck starts to turn in his favor.  That turnaround has to come eventually, and when it does Nova could be in for a bounce back.
Posted by Unknown at 3:27 PM