Where Was Brett Gardner Last Night? 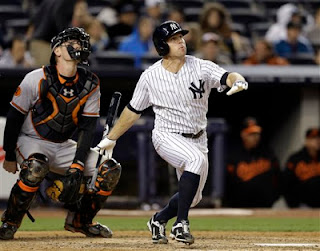 To not see Brett Gardner's name included in last night's lineup was more than a bit surprising.  There hadn't been any reports of him being sick or injured, the team was coming off a scheduled off-day for travel and had actually had 2 scheduled off-days in the last 5 calendar days, they were playing in the notoriously offense-friendly Coors Field, and Gardner has been the best defensive player and one of the best all-around players on the team so far this season.  Yet there he was, plopped on the bench while Joe elected to send arguably the weakest lineup of the season out there to play, not score, and lose.

Joe's explanation for this decision was, as you'd expect, matchups.  The Yankees were facing another left-handed starter last night in Jorge De La Rosa, and Joe wanted to put another righty bat in the lineup.  Unfortunately, the only available righty bat on the bench is Ben Francisco and that's where the decision making train starts to come off the tracks of logic.


Sure, Francisco hit a HR off a lefty recently, but that doesn't wipe away the fact that he only has 2 hits in his other 33 plate appearances against southpaws this season, or that he's still hitting just .129/.270/.226 overall.  1 home run does not erase a month of suck.  Going Francisco for Gardner also assumes that Gardner has been hitting poorly against lefties this year, which a 10-second check of FanGraphs shows is not the case.  Standard SSS warnings apply, but Gardner's batting line against lefties this season (.267/.320/.467) has been better than his line against righties (.270/.349/.365).  While that's mainly on the strength of the 2 homers he's popped, if we're playing the matchup card, don't those numbers make Gardner look like a better matchup against a lefty  than Francisco?  And that's not even factoring in the added value of better baserunning and much better defense that Gardner offers, defense that was seriously downgraded by taking Gardner out of center field and adding Francisco to the mix.

Not surprisingly, the Yankee offense was pathetic last night.  What would you expect from a lineup that had Jayson Nix hitting 2nd, Francisco 5th, and a 7-9 of the Chrises Nelson and Stewart and Hirok?  Joe was already handcuffed by not having Travis Hafner, his 2nd biggest offensive weapon, available and he decided to make things more difficult by sitting his leadoff hitter and starting center fielder, a player who brings much more to the table offensively and defensively than the player who replaced him in the lineup.

I can understand wanting to play machups with a platoon-heavy team, and I've applauded Joe for his willingness to tweak the lineup this season.  This was a case where he overthought it, though, and in doing so he gave his team less of a chance to win the game.  Brett Gardner may not be a world beater against lefties, but he's proven to not be a complete black hole against them.  That and the value his speed brings to the game are more than enough reason for him to not need to be platooned.

It's real simple, Joe.  If he's not hurt, Gardner should be in the lineup every day.
Posted by Unknown at 12:00 PM