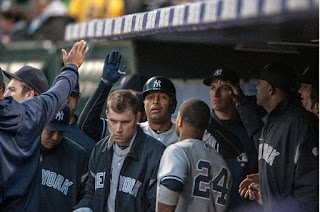 - Phelps: 6 IP, 3 H, 2 ER, 1 BB, 4 K.  That rotation competition might be heating up again, eh?  Nova was a little shaky in his rehab outing yesterday and Phelps has pitched pretty well since taking his spot.  He may get a start in the doubleheader, but I wouldn't say Nova is a lock to get that spot back from Phelps with the way Dave is pitching right now.

Another rubber match for the Yanks today, afternoon start time.  CC Sabathia gets the start against fellow lefty Jeff Francis.
Posted by Unknown at 7:26 AM